Trump's Deal of the Century

he will make a firm covenant with the many for [seven years]. Dan. 9:27b 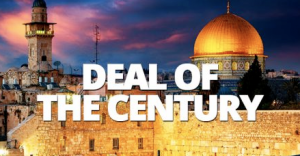 While the world is distracted with the governmental restrictions imposed due to the so-called “pandemic,” the push for a peace treaty between Israel and the Arabs regarding Palestine continues to move along.

President Trump has labeled his offer as the “Deal of the Century.” The main part of the deal is that Israel would give the Arabs a piece of Jerusalem and the Arabs would recognize Israel as a country.

This treaty, orchestrated by Jared Kushner, Trump’s son-in-law, also proposes Israel taking back some of the West Bank land in exchange for allowing a Palestinian capital in east Jerusalem.

Obviously not everyone is on board, on either side. But clearly it’s got potential to get serious traction, despite giving back east Jerusalem (but not the Temple Mount).

Under the Trump proposal, Israel would take about 30% of the West Bank area, formally called Judea and Samaria. This is land that Israel already controls and uses for agriculture. It also connects key defensive land segments on the Jordanian border from just south of the Sea of Galilee to the south end of the Dead Sea. 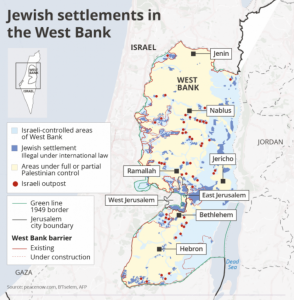 There are numerous Jewish “settlements,” what we simply call “neighborhoods,” that will formally be included as part of Israel. There are 130 of these neighborhoods housing 430,000 Israelis. All of these areas are already militarily controlled by Israel.

You have to realize that Israel has expanded its borders only four times in its 70-year history. So this is not something they take lightly. But peace with its enemies has been a life-long desire for Israel. Plus the treaty would make all the existing Jewish neighborhoods legal in the eyes of the world courts.

We’ve yet to see an approved and completed map being touted in the news so the treaty is yet to be finalized. When the maps are released, that’s the sign they’ve come up with a final plan they think is workable.

In the map above, the light blue shaded area is roughly what Israel will annex. In the "Vision" map below, you can see what will be "Palestine."

No one is saying much about where the Palestinian capital will be located in Jerusalem. Having an Arab country a stone's throw from Jerusalem and the Temple Mount is hard to imagine ... not sure how that would work. So they have a lot of details to figure out.

Of course, the United States is expected to play its part in the peace process by not only supporting the treaty but also pitching in a large amount of cold cash, as they did in the Israel/Egyptian peace plan in the 1970’s.

Before November
The window of opportunity to get this done is only open because of President Trump’s unwavering support of Israel. So they have to get this done prior to November elections. 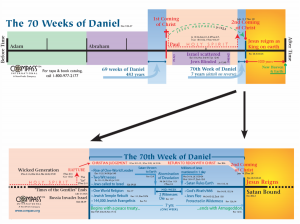 This treaty is of huge interest to Bible prophecy pundits as the Bible prophesies that a peace treaty will begin the 70th Week of Daniel—the 7-years of horrific world judgment from God. And the 7-year tribulation FOLLOWS the Rapture.

And to make it even more interesting, the Trump treaty mentions a four-year period. Just the fact that it has a specific time period is breath-taking. Hey, four is not that far from seven!

The 50-day Interim
In the 50-day time period after the Rapture and before the Tribulation begins(3), with Israel’s only ally, the United States, decimated from the effects of the Rapture, Russia and Iran see an opportunity and invade Israel as described in Ezekiel 38 and 39. Russia, Iran and a few other smaller nations lose badly.

In the aftermath of this invasion, Israel comes out the top military dog in the world and begins wiping out, one by one, those enemies surrounding her who have sworn to destroy her.

“In that day I will make the clans of Judah like a firepot among pieces of wood and a flaming torch among sheaves, so they will consume on the right hand and on the left all the surrounding peoples, while the inhabitants of Jerusalem again dwell on their own sites in Jerusalem. Zech. 12:6

With the Arab nations screaming for help as they are being wiped out one after another with nuclear weapons (Zech 14:12), in steps a man with a plan. This world leader will promise peace for Israel if they will stop the carnage. He’ll convince ten nations to sign the peace treaty.

The day the treaty is signed begins 7 years of God’s earthly judgment, also called the Time of Jacob’s Distress (Jer. 30:7). 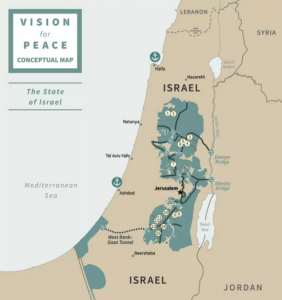 The map above was the original VISION map showing a tunnel from Gaza to the main Palestine area. All the blue is Palestine and all the brown inside Israel's border is Israel.

The Trump treaty being proposed would be further along if not for the Covid-19 world shutdown. It was actually originally set to go into effect in June. President Trump has indicated through his Press Secretary that he’ll announce support for the treaty soon.

Trump wrote a best-selling book entitled The Art Of The Deal. So he knows a little bit about negotiating. He’s looked at why the past Middle East peace deals failed and determined the problem was the architects didn’t address the people/culture. They only dealt with a military peace treaty.

So the Trump treaty proposal includes dealing with both the culture and the military. The elephant-in-the-room question is: Will the Arabs really be able to accept Israel as their neighbor, without universally trying to defeat her 24/7?

Only time will tell. And if they say they will accept Israel, based on past comments, they're lying.

Never Divide the Land of Israel!
Also, don't forget God's never happy when you try to divide up His land that He gave to Israel.

I will gather all the nations and bring them down to the valley of Jehoshaphat. Then I will enter into judgment with them there on behalf of My people and My inheritance, Israel, whom they have scattered among the nations; And they have divided up My land. Joel 3:2

We don’t know if this Trump treaty has anything to do with the final Daniel 9 covenant/treaty, but if it does, we could be getting close to the ear-splittingly loud departure of the Church.

On the other hand...don't count on it
But those who follow Compass know that I don’t think Rapture is happening this September, the time of year the Rapture is most likely to occur.(1)

Obviously I don't know for sure and I certainly could be wrong. But based on what I read in scripture, we probably have somewhere between 4 and 17 years.(2)

While that makes a lot of people groan, we should all be joyful for the many people who’ll get saved and miss God’s judgment on the earth because the Lord tarried. And that's more important than any of our own problems!