Great STEEL ON STEEL!! Get all 7 Presentations and SAVE!

DVD, Audio CD, or BOTH video & audio on a Compass Flash Drive! Check out these options for purchasing all seven titles:

Scroll down for the awesome details on these great speakers and topics. 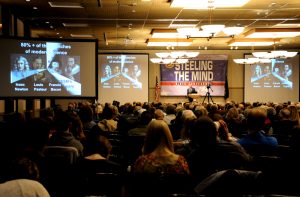 When asked to explain or defend the Genesis account of God's 6-day Creation, there are myriads of undeniable facts you can use, but most Christians don't know them! Russ walks us through 10 scientific truths that make the theory of evolution look downright stupid!

Why Capitalism vs. Socialism is God vs. Satan

Socialism is making a comeback -- should we be worried? Yes! While capitalism has its roots in the Bible, Socialism and its close-cousin Marxism is from the pit of hell. People seem amused at Bernie Sanders, but his socialistic dreams are a true threat to our Christian freedom in America. This push for collectivism is real and this presentation will be an eye-opener, to say the least!

Judgment In The Valley of Jehoshaphat

Some 80% of Christians believe that the Church is now the recipient of God's original promises to Israel. But is that in Scripture? Dave succinctly dismantles this absurd doctrine while showing the awful ramifications of its tentacles.

Where Have All The Pastors Gone?

For the past 15 years, the quality of teaching from our nation's pulpits has dropped to new lows. Someone questioning the pastor on Biblical point is often asked to leave. And if you currently have a good pastor, who will replace him when he retires? Uncomfortable but necessary information!

This is what a Bible conference is all about--Russ will show you how to easily defend the Bible in 25 of the most-often debated and discussed topics.

Unfortunately, we live in a society that includes a lot of fruitcakes. And all people, Christians included, need to know the basics of personal safety for those "what if" situations. Dave's spent 25 years working with thousands of individuals and hundreds of corporations throughout the United States and Canada, educating people on what to do if they find themselves in an active shooter situation in church, the mall, movie theater, etc. You will remember this one for the rest of your life!

The Bible says Christians are actually grafted into the promises given to Israel. Paul says we're adopted into the Jewish faith. That means when it comes to Israel, we're family. So as much as Satan hates Christians, he hates the Jews even more. Dave lists the major lies Satan has perpetrated about the tiny Jewish nation that's come back from the dead after some 2000 years of dispersion.