Keep Your Eyes on Israel! 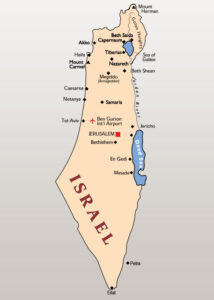 Keep Your Eyes On Israel!

“Those who have insight will shine brightly like the brightness of the expanse of heaven, and those who lead the many to righteousness, like the stars forever and ever.” Dan. 12:3

Chuck Missler often said, “If you want to know where we are on God’s world-clock, look at what’s happening in Israel.”

The world as a whole has no clue what you and I know to be factually true…that Israel is what’s important to God and Satan is doing everything possible to destroy her.

This entire Covid scam, this attempt to depopulate the earth via secretely injecting poison into over half the human population, the rise of a one-world government, and the take-down of the United States is all about Israel.

Most people in the world today have no clue that the Lord Jesus Christ, a human Jew, will physically return from heaven and reign over the earth FROM JERUSALEM for 1000 years.

The world has no clue that 2600-year-old Bible prophecies are falling into place like a finished jig-saw puzzle. They may see the pieces in a pile, but they have no clue how they fit together.

Think about all these prophecies about Israel having fallen or now falling into place:

The Bible says when Israel returned to her land she would become a nation in a single day. She did. (Is.66:8)

The Bible says when Israel returns she will have remained a pure race. She did. (Rev. 7:4)

The Bible says that when Israel returns she will have two arch enemies: Russia (Gog) and Iran (Persia). They are. (Ezek. 38:3,5)

The Bible says that when she returns she’ll have a mighty military. She does. (Ezek. 37:10)

The Bible says Israel will be a burdensome stone for the world. She is. (Zech. 12:3)

The Bible says when Israel becomes a nation again the world will have nuclear weapons. (Zech. 14:12) It does.

Prophecies about Israel after the Rapture: 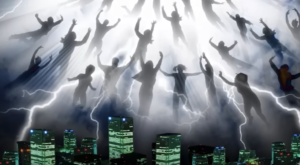 The Bible says after the Rapture Israel will rebuild her Temple and go back to blood sacrifices. She's talking about doing that today.(1) (Dan. 9:27) (Rev. 11:1)

The Bible says Russia and Iran will invade Israel to capture her gold and silver riches. (Ezek. 38:13)

The Bible says that Israel’s vast gold and silver riches are so large that several nations will invade to plunder. We know Solomon’s riches are still buried somewhere in Israel and this implies they will discover these riches prior to the Rapture.(2)

The world has no clue how much Bible prophecy is coming together, but we do. God has given us spiritual insight in these last days to comfort us…because it proves the accuracy of the Bible.

And when we see these things coming together, we know the Lord will rescue us from God's wrath via the Rapture. So that exhilarating moment is getting closer and closer. 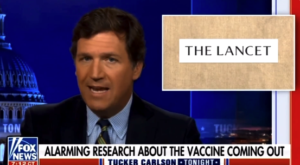 If you only have a little time,
watch this one first!

Fox Breaks With Other National Networks

I guess I should apologize to Fox. I had them in the same boat as CBS, NBC, ABC, CNN, etc. Well, let's just say Tucker Carlson risks his life with this expose'!

People started catching on that the drug Remdesivir is killing patients so the FDA has approved a substitute ... which will also kill you! Dr. Ardis explains on Shots Fired...

This is a video montage of people who died from the va((ine around the world. I could only get through 8-minutes -- it's that heart-breaking. If there was ever any doubt in anyone's mind that a world population reduction has begun, they should watch this video.

Ouch! Carrie details her plane crash and following miracles that she experienced during and after the crash. Fascinating!

A funeral director laments all that's going on with dying babies in England. In a related article, last week we linked to an article about the rise in baby coffin sales. CLICK HERE

Those who read and understand this article never ever will wear a mask again.

A doctor called watching this "...the worst 15 minutes I've ever seen." I guess he's had his head in the sand for the last two years. We published this link last Christmas, but due to the holidays I guess many missed it.

Bottom line of this video: Pathology results show 93% of people who died after being vaccinated were killed by the vaccine. Yet the Globalists/Satanists continue to cover up the facts while pushing for more va((ines and boosters. I'm guessing that most of those who are va((inated and miss the Rapture will die early in the Tribulation.

Looking Under The Hood

Top-ranking Biden administration officials — including Fauxi and five social media giants — have been subpoenaed in a lawsuit alleging they colluded with social media to suppress free speech. This could get interesting.

While all the other nonsense is going on, the push for a traceable digital dollar continues unabated.

The World Health Organization did this despite only 6 deaths worldwide and 99% are homosexuals. Aren't you glad the WHO doesn't reign over your health care! 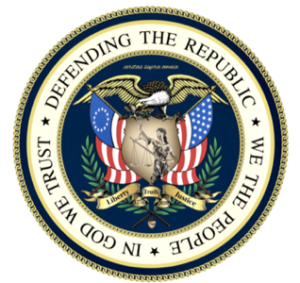 This will be interesting to see where this goes...Sidney Powell is the lead attorney.

These members of the Coast Guard, et al, have sincere religious beliefs which prevent them from receiving the mandated COVID-19 "vaccines." Their religious rights should have been respected and they should have been allowed to continue to serve their country without the shots. Instead, they have been harassed, denied promotions, received discipline, and face imminent separation – while their "vaccinated" Coast Guard peers continue to get COVID-19 in large numbers.
Stay tuned...

The Fed Is Trapped 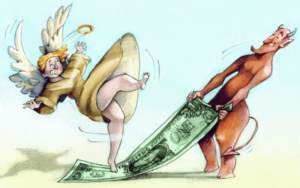 When politicians carelessly spend and print money measured in the trillions, you are in dangerous territory.

Even according to the government’s own crooked CPI statistics—which understates reality—inflation is breaking through 40-year highs. That means the actual situation is much worse.

The US federal government’s deficit spending and debt are the most significant factors driving this money printing, resulting in drastic price increases.

The truth is, the debt will keep piling up unless Congress makes some politically impossible decisions to cut spending. But don’t count on that happening. In fact, they’re racing in the opposite direction now that they’ve normalized multitrillion-dollar deficits.

Congress spends trillions more than the federal government takes in from taxes. The Treasury issues debt to cover the difference. The Federal Reserve creates currency out of thin air to buy the debt.

In short, this insidious process is nothing more than legalized counterfeiting. It’s taxation without consent via currency debasement and is the true source of inflation. Mainstream media and economists perform incredible mental gymnastics to conceal and justify this fraud.

The amount of federal debt is so extreme that even a return of interest rates to their historical average would mean paying an interest expense that would consume more than half of tax revenues. Interest expense would eclipse Social Security and defense spending and become the largest item in the federal budget.

Further, with price increases soaring to 40-year highs, a return to the historical average interest rate will not be enough to reign in inflation—not even close. A drastic rise in interest rates is needed—perhaps to 10% or higher. If that happened, it would mean that the US government is paying more for the interest expense than it takes in from taxes.

In short, the Federal Reserve is trapped. Raising interest rates high enough to dent inflation would bankrupt the US government. 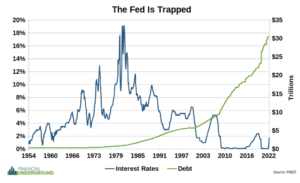 The higher the federal debt, the harder and more painful it becomes to raise interest rates.

In short, the US government is fast approaching the financial endgame. It needs to raise interest rates to combat out-of-control inflation… but can’t because it would cause its bankruptcy.

The current monetary system is on its way out. Even the central bankers running the system can see that. So they are preparing for what comes next as they attempt to "reset" the system.

It’s going to result in an enormous wealth transfer from you to the parasitical class—politicians, central bankers, and those connected to them. It's not going to be pretty.

Can The Jabbed Infect The Unjabbed?

This is a bit creepy but don't miss the fact that this is rare and also that millions of blood cells continue to be made in your body each day replacing damaged cells.

On the other hand, if this is as bad as they claim, it would lead you to Rapture being sooner than later.

I heard another voice from heaven, saying, “Come out of her, my people, so that you will not participate in her sins and receive of her plagues;" Rev. 18:4

This is not surprising but still makes you mad. We have a health system that has become politicized. If the Rapture doesn't come soon, Believers will be on the outside looking in.

Short video of her explaining what actually happened and why she is being incarcerated for 60 days. Jailing your political foes is 100% communist. Just saying.

LOL - Now Biden can't even read a teleprompter. They had to splice together several clips to get a couple of sentences to release to the public. And it also appears they're using a double, a stand-in. One of the two doesn't blink and parts his hair on the wrong side. Can't be the same guy!

Kamala resigns Vice President due to whatever.

Biden resigns due to health.

And this has happened fairly recently.

So between 1974 and 1976 we had an un-elected President and Vice President.

If this is what they're planning to do, it will probably happen after the mid-term elections.

Search Past Hot Links From Our Weekly Additional Resources

***To see or search all our eye-opening past Additional Resources links
CLICK HERE
You can search by date, word in topic or scroll through hundreds of hot links—try it!
Brought to you by our Compass Pointes!

This information is suppressed in the United States and few are talking about it. But if you are a va((inated woman and get pregnant, you have a 73% chance of miscarrying. 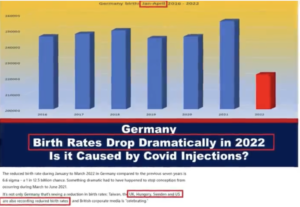 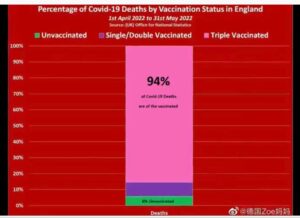 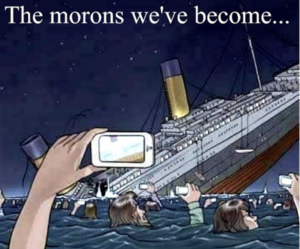 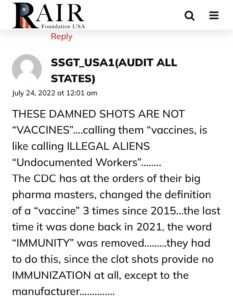 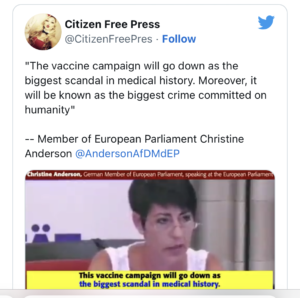 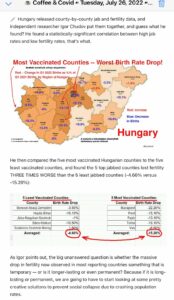 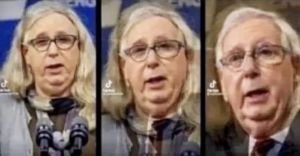 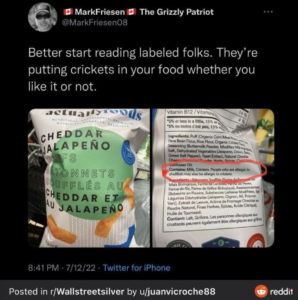