The mainstream media are not covering this, but in Portland, Oregon, Antifa and Black Lives Matter (BLM) are now burning flags and Bibles in bonfires in 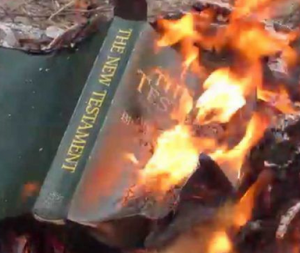 the streets.(3) They are no longer hiding their true colors.

It has been shown that Antifa and BLM are both Marxist-run organizations that are engaged in a war to take down this country.(1)(2) The World Elites are happily funding all of this as the United States, led by President Trump, is not buying into their world agenda.

But that's only looking at the surface problem. The root cause of all this is Satanic. Satan has deceived these dumb-downed people to do everything they can to collapse the United States government—forcing it to go along with his coming one-world agenda.

Believers watching all of this can easily see the tie-ins to Bible prophecy. We KNOW where this will end up. The question is when.

Are we that close to the Rapture? Or will President Trump prevail and make the tough decisions necessary to save the country? History tells us we could definitely lose our republic.

But I believe God is not done with us. I believe He put President Trump in office for a reason and He's exposing the evil that has been controlling us from behind the scenes.

I think the evil Satan followers are running scared and know they will lose their best opportunity to fold Americans into their system if President Trump is reelected.

So these world sleeze-bags are holding nothing back. They control most of the media and pummel President Trump with lies 24/7.

Between now and the November elections, the carnage will continue to be unleashed. Expect it.

The Democrat Party has been hijacked by Socialist/Marxist ideology, which is, again, the surface problem. Satan is alive and well. He is the root problem.

If Satan's emissaries get back in power, they won't care about constitutional rights. Closing churches and burning Bibles would be the least of our concerns. Satan is a great liar so truth will continue to be hard to discern.

Make no mistake about it—Satan has them believing they can take our country down. If you think this will just pass in time, you're sadly mistaken.

Thankfully, Satan is no match for Jehovah God of the Universe Who lives IN Believers. And greater is He Who is in us than he who is in the world. (1John 4:4b)

Always remember, when we resist the devil he will flee.

Submit therefore to God. Resist the devil and he will flee from you. James 4:7

So pray for wisdom and act boldly. We can move mountains.

So what's left to be trashed between now and November?

Anything that is good, working and/or useful to everyday life in America. Undoubtedly these evil people are looking for anything they can destroy to disrupt the American way of life.

Our monetary system is fragile and could be targeted. Any and all aspects of it. The Elites ultimately want a world digital currency because with it they can easily

If Biden is elected we will probably be part of a global e-currency. If President Trump is re-elected, we'll probably have a new digital dollar. Either way, the paper dollar is on its way out.

We wrote about the coming world reset a couple of months ago.(4) If paper money is being ushered out, so could other "paper" assets. Think "hard."

When you read all this hard-to-fathom stuff, never forget it's God Who's in control, not these prideful Satan followers. They don't get control until we're taken out of the way via the Rapture.

So until then, use us, Lord!

Trust in the LORD forever, for in GOD the LORD, we have an everlasting Rock. Is. 26:4

This was an introduction article for an Enews article called "Digital Money &  Forced Vaccines". To view this article click here.