For Bible prophecy purists, that headline will undoubtedly cause a lot of people to say… “WHAT IN THE WORLD?” But believe it or not, as strange as that is, that’s exactly what’s happening today.

Amillennialists (Lutherans, Presbyterians, Catholics, et al.) interpret those verses to mean Jesus is already reigning, in heaven, and the “1000 years” just means He will reign a long time.

So the main difference in premill and amill is that premills take the Bible literally, while amills take it figuratively.

Yet today, both amill and premill are coming to the same conclusion—that we’re getting close to the end, and something big is about to happen.

This is so interesting…as you can see from the chart, both premillennialist and amillennialist eschatology begins with Jesus’ sacrificial death at the cross and ends with the New Heaven and Earth.

The only difference is the order of the Rapture, Tribulation and Christ’s reign.

Premillennial eschatology lays out the Rapture, Tribulation and Jesus' reign on earth like this:

And amillennial eschatology views the Tribulation in the past and the Rapture in the future.

Since the amills don’t take the Bible literally, they can generalize verses like the mountains falling down in the tribulation to just mean awful things happen.

and he threw him into the abyss, and shut it and sealed it over him, so that he would not deceive the nations any longer, until the thousand years were completed; after these things he [Satan] must be released for a short time. Rev. 20:3

When the thousand years are completed, Satan will be released from his prison, and will come out to deceive the nations which are in the four corners of the earth, Gog and Magog, to gather them together for the war; the number of them is like the sand of the seashore. Rev. 20:7-8

Believing that Satan has been bound for the last 2000 years, amills believe this verse means Satan will be released just prior to Rapture.

Why This Is Important To Us Today
Like premills, the next big thing on the amill church event calendar is the Rapture. And amills believe the Rapture will be preceded by Satanic activity on the earth.

Amills look at what's happening on the earth today and believe Satan has obviously been released…therefore the Rapture must be close. Today’s world events fit like a glove into their eschatology.

Premills look at what’s happening on in the earth and also think the Rapture must be close, followed by the Tribulation. That’s incredible!

Therefore, amazingly, God has allowed both pre- and amill theologies, despite their major differences in the order of events, to believe we’re getting close to the Rapture!!!

And we'll explain it to them on the way up:-)

Blessed is he who reads and those who hear the words of the prophecy, and heed the things which are written in it; ... Rev. 1:3

Any way you look at it, things are continuing to be heating up globally this summer. This makes September's Rosh Hashanah a possible date of our exhilarating exit.

Correction on the time we listed in the last Compass eNews of the blowing of the Last Trumpet of Rosh Hashanah: Wednesday, September 8, 2021, at 8:54 AM Pacific, 11:54 Eastern.

Lots of Interest in this Chart
The chart below was first published in the last Compass eNews. It has generated a LOT of comments.

The chart shows that if the deaths coming from the Covid va[[ines are linked to Revelation 6:8, then the Rapture may be very close indeed.

There are definitely good reasons to think the Rapture may not happen this September. But there are also growing reasons it may in fact happen. Could go either way... 50-50 chance. 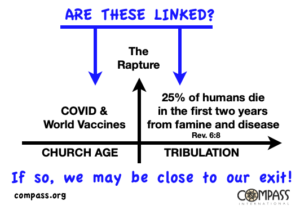 Please keep in mind as you watch/read/listen to these links below that none of what's going on in the world makes any sense unless you look at it from a Biblical perspective— understanding that Satan is the god of this world and he's chomping at the bit to take over once the Restrainer is removed. CQLJ

Alex Newman interviews Dr. Carrie Madej. Madej shows scientific information slides about what the gene modification therapy/va[[ine is actually doing to humans...ultimately they want to monitor our every breath. They believe they can achieve eternal life through nanotechnology... unbelivable!

Apparently there are some who follow Compass who are still on the fence about getting the so called "Va[[ine." Every Believer needs to watch this! There is no variant... Corona virus is not novel...there is no pandemic. Dr. David Martin with Reiner Fuellmich.

Scientists have now examined the Pfizer "va[[ine" and found it's full of poison. The Globalists are up in arms over this video, and trying to do everything they can to discredit it. But it is consistent with everything else we're finding. Stew Peters interviews Dr. Jane Ruby.

Dr. Charles Hoffe says due to the spike protein in the Covid va[[ine, it's predictable and inevitable that blood clots will form in every va[[inated person. 62% of his va[[inated patients are already showing signs of microscopic blood clots building.

This obliterates the false narrative that once claimed a vaccine would earn back your “freedom.” Now they are saying if you survive the shot and don't die from blood clots caused by the shot, you'll be on the hook for a shot-a-month to stay alive.

Sharyl Attkisson explains how Big Tech “is censoring factual and truthful information while propagating false information” about the safety of COVID vaccines.

A Critique of mRNA Va[[ines

Pathologist Dr. Ryan Cole discusses the virus & the vaccine including how it works & the spike protein's impact. Plus good info on antibodies present in recovered Covid patients. More information the Globalists/Satanists don't want you to know.

Short and solid video highlights you can forward to your friends regarding the va[[ine.

Millions of Illegals Transported by Bus and Planes to America's Interior, 24/7

In case you missed it, this is a doozie! Tucker Carlson lays wide-open what the Globalists/Satanists are doing with our southern border. Unbelievable!

This is just more evidence those in power are not trying to defend the constitution, but rather trying to sabotage and collapse this country in order to bring it under a world government. At least that's sure what it looks like.

Something must happen soon... either Rapture, or another lock down, or somehow the Globalists/Satanists lose power to the patriots. Not many other choices.

When the Biden Administration Knocks on Your Door 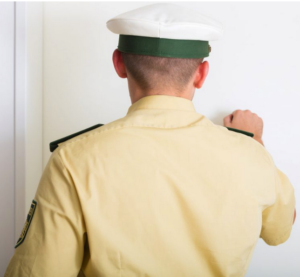 From The Lighter Side