Will Our Pets Be Raptured With Us? 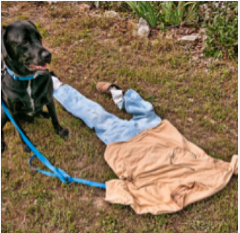 A righteous man has regard for the life of his animal. Prov. 12:10

Most Believers have, or have had, pets. They often become dearly beloved parts of our families. We can relate to them because they experience pain, suffering, anger and grief, much like we do.

So the elephant-in-the-room question for Believers is “What’s going to happen to our pets after we’re beamed up?”

No one wants to think about blasting out of here leaving behind our pets to deal with the ravages of the Tribulation. So what can we find in Scripture to give us some insight?

For starters, we know God loves His animal creation. He gave man dominion over them at creation and commands we take care of the ones we domesticate.

Know well the condition of your flocks, and pay attention to your herds; Prov. 27:23

God says He watches each and every one of them 24/7. 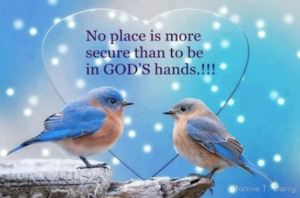 Are not two sparrows sold for a cent? And yet not one of them will fall to the ground apart from your Father. Matt. 10:29

God refers to animals as His own.

For every beast of the forest is Mine, the cattle on a thousand hills. I know every bird of the mountains, and everything that moves in the field is Mine. Psa. 50:10-11

God takes responsibility for providing for them—through man or directly from Himself.

Look at the birds of the air, that they do not sow, nor reap nor gather into barns, and yet your heavenly Father feeds them. Matt. 6:26

Land animals do seem to be elevated a bit above fish and birds. We see Adam had a special relationship with animals, naming each and every one.

Fish and birds were created on Day Five of the creation week. But on Day Six we see God creating land animals alongside humans. 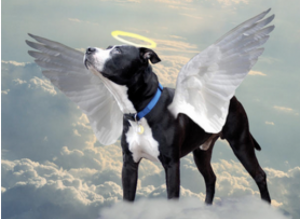 We first need to address the issue of pets and eternity because if they’re not going to be in heaven, then their getting Raptured is a moot point.

Please note that I’m not suggesting that Jesus’ shed blood covered the animals also. Just that God loves His animals and there will be at least some in heaven.

Animals aren't redeemed in the same way humans are, by the blood of Christ, as they didn't sin. They were just penalized along with Adam and Eve. Therefore God can and probably will deal with animals differently.

CS Lewis said in his book, The Problem of Pain, that he thought the tame animals might enter the pearly gates of heaven through their relationship with humans.

Randy Alcorn also believes our pets could be in heaven. He contends in his book, Heaven, that since horses are in heaven, then why not pets?(1) He makes a good point.

And the armies which are in heaven, clothed in fine linen, white and clean, were following Him on white horses. Rev. 19:14 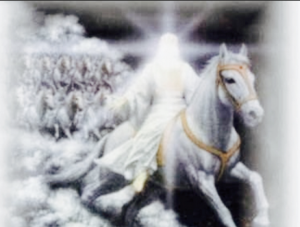 Jesus even returns for His Second Coming literally on a horse.

And I saw heaven opened, and behold, a white horse, and He who sat on it is called Faithful and True, and in righteousness He judges and wages war. Rev. 19:11

Before Adam’s sin animals could talk and they didn’t eat each other. So animals also paid a heavy penalty when Adam sinned. Even the female animals suffer pain in the birthing process like humans.

For we know that the whole creation groans and suffers the pains of childbirth together until now. Rom. 8:22

In the future, animals could likely be able to talk. They have all the body parts necessary to speak, and 3500 years ago God used those parts and made a donkey talk, while reasoning!

And the LORD opened the mouth of the donkey, and she said to Balaam, “What have I done to you, that you have struck me these three times?” Num. 22:28

So animals will definitely be in heaven in some form. Therefore, it’s likely your pets will be there too. And probably even able to converse with you. Which means you might want to upgrade your pet food as I suspect a lot of them might bring up the subject!

So the question becomes, since God commands us to take care of His animals, should we be making arrangements for our pets post-Rapture? Should we leave a few bags of food with a non-Christian neighbor just in case?

Of course, if everyone did take some pet food to their non-Christian neighbors, what a great witnessing opportunity! “In case I suddenly disappear…” 🙂 You could also stick a Millions Missing pamphlet in the pet food bag.

But that would also raise the question of how much food would you want to leave? 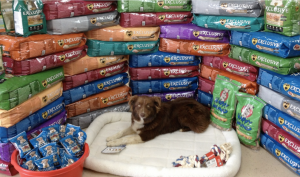 And what about all those pills the vet has you administering. Which leads to vet bills. Should you just leave them an extra credit card since you won't need it any longer?

In the Tribulation we see animals eating people so we know ALL animals will not be Raptured/translated.

I looked, and behold, an ashen horse; ...to kill with sword and with famine and with pestilence and by the wild beasts of the earth. Rev. 6:8

Since there are myriads of Believers who get saved during the Tribulation and suffer greatly for their faith in Jesus (Rev. 7:9-17), you would have to expect that animals would suffer and die along with them. Those who didn't make it on Noah's Ark were wiped out.

However, leaving food and credit cards behind for your pets may be unnecessary. *Here's why...

The Lord protected some animals on Noah’s Ark along with the humans, and Jesus used the symbolism of the flood and the days of Noah to explain the last days. So you can definitely make a case for the Lord taking at least SOME animals off the earth before His wrath is unleashed.

Jesus gives us some insight...He said the days before the Rapture would be "just like" the days of Noah and Lot.

Jesus even details to us what those days were like:

“For as in those days before the flood they were eating and drinking, marrying and giving in marriage, until the day that Noah entered the ark," Matt. 24:38

Now, if it's "just like" Noah's day, and Noah floated away with an ark full of animals, leaving some behind...we should expect the Rapture to be similar. This is what the Days of Noah looks like in chart form: 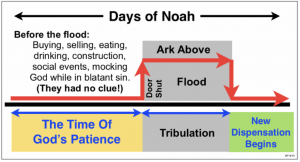 And if you apply the "just like" to the time before the Rapture, then we should expect Him to take some animals in this removal. In chart form, the time before, during and after the Rapture/removal, looks like this:

Therefore, we expect SOME animals to be taken/translated from the earth, along with us Believers, in order to miss God's wrath. Then the logical choice for at least SOME of the animals would include our pets.

Interestingly, these animals would be expected to return to the earth with the humans at the end of the Tribulation, for the Reign of Jesus in the Millennium.

This is consistent with verses that show animals in the Millennium have changed back to their original non-carnivorous state during the Millennium.

"The wolf and the lamb will graze together, and the lion will eat straw like the ox; and dust will be the serpent’s food. They will do no evil or harm in all My holy mountain,” says the LORD. Is. 65:25

And if this is true, then they will also be able to talk again. Again, upgrade that pet food as soon as you can!

What Exactly Defines A Pet? 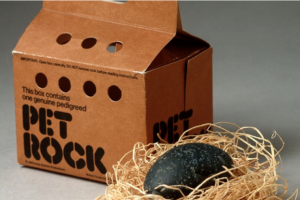 Of course, if God does take some pets, then the obvious question would be which animals are covered as pets? Obviously pet rocks won't be included. But what about pet fish, pet birds or even pet snakes since they were originally created as walking-around animals?

And if you do have a pet snake that's Raptured/translated, will it come back in the Millennium with legs? That'll be interesting!

Based on my understanding of a Scriptural application of the Days of Noah, it's likely that some or all the pets will be removed from the earth before the Tribulation just like some of the animals were removed before the flood.

But since God is perfect in everything, maybe it's best to rest on the fact that we cannot even imagine how glorious the next life will be post-Rapture, with or without our pets.

This means that if you think having your pet Raptured with you would be great, it’s actually going to be better than that.

If you think it would be awesome to walk your dog every day on a stone path along a babbling brook in the sun-filtered woods, it’s better than that.

Heaven WILL BE better than anything you can imagine. Regardless of what you can dream up, it's MORE glorious. 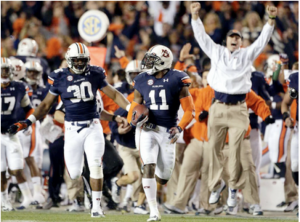 For me, I like to think heaven will be like the feeling I get when Auburn beats Alabama by scoring the winning touchdown with one second left to play. I can't imagine how it could be better than that ...but it will be! Go God!

When The Powers That Be Share their Plans 10 minutes

You should watch this even if you're not planning on getting the COVID vaccine! The CDC is now reporting there have been 40,000 reports of adverse reactions in the first month of the vaccine roll-out. I pray she's wrong but Dr. Tenpenny makes a good case this is only the beginning.

Wake UP And Smell The Coffee - 2 minutes

A Virus They Knew Could Be Manipulated

Could the COVID vaccine be used as a bio-weapon?