What the Bible Says About Stopping the Coronavirus

FacebookTweetPinEmail1
…you shall serve the LORD your God, …
and I will remove sickness from your midst.
Ex. 23:25

We can trust the Bible
The Black Plague/Black Death began in Europe in 1347 AD, killing an astonishing 200 million people in four years (1). The only way the Black Plague was finally contained was when people brazenly applied the Biblical principle of quarantine. 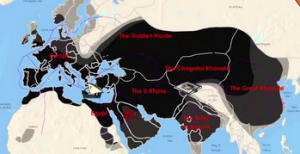 Venetians were the first to apply the Bible's instructions regarding dealing with infectious disease. After studying Leviticus 13, they made all new arrivals stay in isolation long enough to determine if they were ill. It worked. Ultimately, taking God’s Word literally is what saved Europe from even a worse fate.

We can apply Biblical principles today
Regardless of how the coronavirus began—by accident or on purpose—it’s important to know what the Bible says about dealing with disease. After all, God is still in control and we’re to look to Him for guidance in all things. And in the Bible He addresses how to deal with contagious diseases.

The most dreaded sickness in the Old Testament was leprosy, a very contagious, disfiguring, and debilitating disease. To protect Israel from this disease, God’s Word gave very specific commandments regarding how to deal with it to keep it from spreading.

The Jewish priests were rarely physicians, but they did basically function as public health officers. Being under the Levitical Law, the priests would judiciously institute all 613 Biblical Laws and Commandments found in the Old Testament, which included dealing with leprosy, a highly infectious disease. 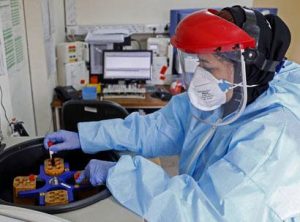 The Old Testament has specific tests to determine if he or she had contracted the dreaded disease. If the priest determined that he or she might have contracted leprosy, the Lord outlined very specific steps in Leviticus 13 to take to help contain it.

When the first warning signs appear on a person’s skin or clothes, the person was commanded by the Levitical Law to go to the priest. The priest examined the person to determine if he was clean or unclean.

…he shall be brought to Aaron the priest or to one of his sons the priests. Lev.13:2b

Categorization
Newly diagnosed leprous people were unabashedly deemed to be in a different class of citizens—they were relegated to the “unclean” category. The priest didn’t worry about hurting their feelings, they were just calling it what it was and following God’s Law.

Quarantine
The first thing the priests did was to separate those who were possibly infected from the rest of the population. 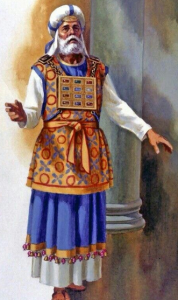 the priest shall isolate him who has the infection for seven days. Lev. 13:4b

Leprosy wasn’t always able to be determined in the first 10 days so additional 7-day periods could continue to be required until the priest could make the final determination if the person had leprosy.

Banishment
Those who were deemed to definitely have leprosy were sent outside of town to live. No one who didn’t have leprosy would go anywhere near a leper.

He shall live alone; his dwelling shall be outside the camp. Lev.13:46b

Garment washing
Interestingly, clothes worn by a potential leper were treated in much the same manner as people. The clothes were quarantined by the priest 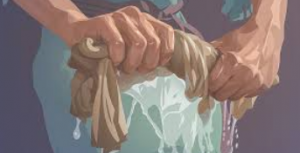 Then the priest shall look at the mark and shall quarantine the article with the mark for seven days. Lev. 13:50

As with people, if the priest wasn’t sure, he could add seven more days of quarantine.

then the priest shall order them to wash the thing in which the mark occurs and he shall quarantine it for seven more days. Lev. 13:54

If the priest found you didn’t have leprosy you simply had to wash your clothes. In some cases you were commanded to burn some or all of the clothes the person was wearing when the infection was discovered, whether the person had leprosy or not.

So he shall burn the garment, whether the warp or the woof, in wool or in linen, or any article of leather in which the mark occurs, for it is a leprous malignancy; it shall be burned in the fire. Lev. 13:52

So how does all this apply to us today?
Basically washing and separation is commanded in the Bible to ward off disease. Staying clean and not coming in contact with an infected person is exactly what is Biblically ordered. So here's what we know:

Wash your hands AND your clothes
Washing, not just your hands but also your clothes, is critical. If you have a compromised immune system, when you come back home from shopping, you should probably take off your clothes and wash them. Hot tubs are looking like a good thing to use after being out of the house.

Avoid handling paper money
It's not just our clothes that can transmit viruses. Using our paper money is also a problem. The corona virus can last up to 72 hours on

Ultimately we know paper money will not be used as the entire world will be electronically connected.

And he causes all, the small and the great, and the rich and the poor, and the free men and the slaves, to be given a mark on their right hand or on their forehead, and he provides that no one will be able to buy or to sell, except the one who has the mark, either the name of the beast or the number of his name. Rev. 13:16-17

Silver kills bacteria
Back in the Old Testament and even up until recent history, silver and gold were the Biblically ordained units of exchange. Silver has a built-in antibacterial agent that kills diseases. Despite repeated use, you didn’t pass along disease from the common use of silver coins.

Silver is a very interesting metal. Until penicillin was discovered in 1928, farmers used to put a silver dollar in the bottom of a milk jug to disinfect it. Ranchers put them in water barrels to keep the water pure.

Today, there are many who tout the use of colloidal silver to combat bacterial and viral infections, and other uses. (3) I AM NOT RECOMMENDING ANYTHING, JUST SHARING SOME INFORMATION THAT MIGHT BE USEFUL!!! 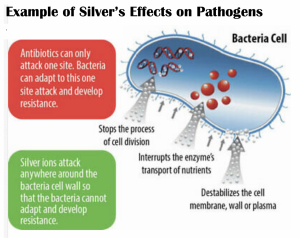 Drink wine
In a general exhortation, Paul told Timothy to drink a little wine for health reasons. Apparently a little wine acts as a disinfectant.

No longer drink water exclusively, but use a little wine for the sake of your stomach and your frequent ailments. 1 Tim. 5:23

On our overseas trips we always suggest sipping on some wine at night when traveling in and between foreign countries to fight off the things we might be exposed to that our bodies are not used to. Regarding the coronavirus, can’t hurt!

Pray without ceasing
Not to be overlooked, we have the privilege of prayer. Living in the Church Age, we have the Lord of the universe living in us. He knows our thoughts, hears and answers our prayers.

Our number one concern should always be to reach people for eternal salvation, not just praying to get people well in this life. God may use the illness to wake people out of their sinful slumber!

As my good friend Mike Gendron recently said, “Most of the world is rightly concerned about the deadly Coronavirus, but few are as concerned about sin, a far more deadly disease that affects everyone at conception.”

Mike nailed it. Don’t get your panties in a wad over this coronavirus. It too shall pass. Instead, direct your prayers and concerns toward a far more fatal eternal disease—sin—a disease for which the cure is readily available.

If you confess with your mouth Jesus as Lord, and believe in your heart that God raised Him from the dead, you will be saved; Rom. 10:9 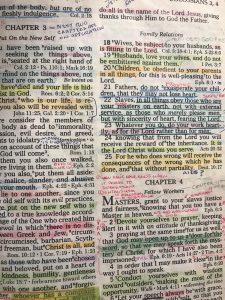 This is an opportune time to be used by the Lord because we have eternal answers. We’ve all been studying and armoring for this very moment. It’s a time for us to be bold and share what we know to our nervous neighbors, family members, and coworkers.

So pray for an opportunity to be used by Him in the lives of those who are in your sphere of influence.

praying at the same time for us as well, that God will open up to us a door for the word, so that we may speak forth the mystery of Christ,… Col. 4:3

May you walk boldly through every door the Lord opens!