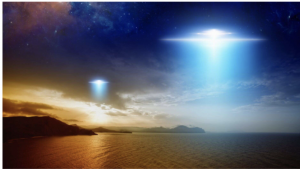 The oldest known recorded incident of a UFO comes from the Bible. Twenty-eight hundred years ago, Elijah the prophet exited this earth on what is best described as a UFO—an “unidentified flying object.” 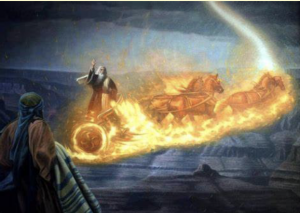 “As they were going along and talking, behold, there appeared a chariot of fire and horses of fire which separated the two of them. And Elijah went up by a whirlwind to heaven.” 2Kings 2:11

This incident lies embedded in the minds of the Jewish people because God confirmed Elijah did not die, but would return again. In the next-to-last sentence of the Old Testament, the book of Malachi records:

“Behold, I am going to send you Elijah the prophet before the coming of the great and terrible day of the LORD.” Mal. 4:5

To this day, at Passover every year Jewish families set an extra place at the table, or an Elijah's Cup, for the prophet Elijah in case he shows up. Just before the Passover meal is to be served, the young kids are often sent to the front door to see if Elijah has come.

But if you are a UFO proponent who thinks Elijah’s earthly departure is proof that UFOs are real, you’re sadly mistaken.

Nowhere in the Bible does it teach that there’s any other form of human-type life in the universe. No extraterrestrial beings are anywhere in this vast universe. Quite the opposite. God always refers to the earth being singularly significant above all else.

But I do believe UFOs are referred to in another place in the Bible, in the New Testament, and that it’s referring to this day and age, the last of the last days.

Immediately after the Rapture of the Church, in the midst of the mind-boggling reality that millions of people just disappeared in the twinkling of an eye, Satan, via his New World Leader, must explain what just happened. It’s called the big “lie.”

Paul, writing to the church in Thessalonica about the Rapture and the Evil One who is revealed to rule in the aftermath, says this:

“For this reason God will send upon them a deluding influence so that they will believe what is false.” 2Thes. 2:11

Satan will do what he does best, he will tell a big bold lie about what just happened. He will try to get people to believe what is false, dooming forever in hell those who believe what he says.

Ever since the movie Close Encounters of the Third Kind in 1977, I believe Satan has been nervously preparing the world for this lie. We’ve seen an obvious exponential increase in UFO articles over the last 40 years. And also more “sightings.”

Now if you are following me closely here, I just said there have been UFO sightings. Yet at the beginning of this article I said there are no such things as an extraterrestrial beings. How can that be?

It’s not that difficult to understand if you stick with the Bible because it is clear that Satan is an angel and angels are spirits. And the Bible says these spirits can take on the form of humans. They look so real you don't even know they’re not human!

“Do not neglect to show hospitality to strangers, for by this some have entertained angels without knowing it.” Heb. 13:2

The Bible says angels come in two types—good and bad. The bad ones fell back during Adam’s day, one of every three rebelled with Lucifer and today we refer to these fallen angels as demons. The good ones we still refer to as angels.

Presumably any angelic interaction by Christians in Heb. 13:2 is with the good angels. But the fact is, demons can also fake who they are. And the head demon, Lucifer/Satan, leads the way. 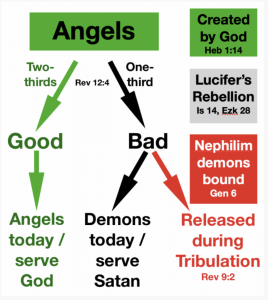 Satan is also the biggest liar of all.

“Whenever [Satan] speaks a lie, he speaks from his own nature, for he is a liar and the father of lies.” John 8:44b

Therefore it’s completely feasible that Satan is intending on using the UFO phenomenon as a way to explain away the Rapture. We have no idea what the context of “The Lie” will be, but it’s going to be a whopper!

“We’re from outer space and have come to save the earth from total destruction. We had to take those nice people away to another planet to reprogram their minds.”

“People from another civilization in space have been watching our planet. For our own good they have removed people who would have destroyed earth.”

Obviously this is a guess, the lie could be anything. All we know for sure is that many will be deceived and believe it. However, we do know, thankfully, that there are an uncountable number of people who do not buy the lie.

“After these things I looked, and behold, a great multitude which no one could count, from every nation and all tribes and peoples and tongues, standing before the throne and before the Lamb, clothed in white robes, and palm branches were in their hands;” Rev. 7:9 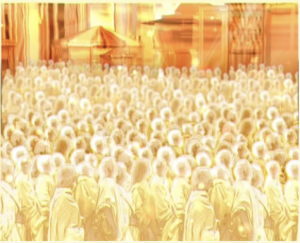 “These who are clothed in the white robes, who are they, and where have they come from?….These are the ones who come out of the great tribulation, and they have washed their robes and made them white in the blood of the Lamb.” Rev. 7:13-14

So we know there will be millions who missed the Rapture who will not follow Satan and ultimately go to heaven. They will refuse the “mark of the beast,” which means they are prohibited from doing anything, including buying food.

“And he causes all, the small and the great, and the rich and the poor, and the free men and the slaves, to be given a mark on their right hand or on their forehead, and he provides that no one will be able to buy or to sell, except the one who has the mark, either the name of the beast or the number of his name.” Rev. 13:16-17

These Believers, who will be saved by faith in the Tribulation, will be hunted and killed during the long seven years of horror, but they spend eternity in heaven, which is all that matters.

So as the Church Age winds up and we witness more and more proclamations of UFO sightings, etc., it should remind you to pray for your family, friends and coworkers who miss the Rapture …that God would grant them wisdom to cling to the truth at all costs.