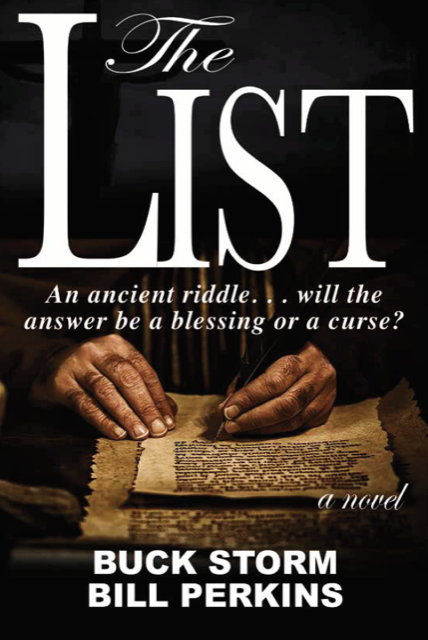 THE LIST
Book Summary
THE LIST is a superbly-written page-turner that introduces readers to an Israel most people have never imagined.

This novel was conceptualized by Bill Perkins, Executive Director of Compass International ministry, and written by Buck Storm, a critically acclaimed novelist and author. Between them, they’ve taken some 65 touring groups to Israel in the last 25 years, falling in love with the land and learning much about a Believer’s adoption into the Jewish promises.

From the book’s inception, the purpose of this novel was to connect Christian Believers with their fascinating Jewish heritage, highlighting along the way the importance and accuracy of the Bible’s Old Testament prophecies… all while telling a gripping story of two Jewish men with beautiful wives living in the fascinating times of Jesus.

It’s a new perspective of the Christ story, taking the reader through the three years of Jesus’ miraculous ministry through the eyes of two rich and powerful Sanhedrin members—Nicodemus and Joseph of Arimathea. Pharisee Nicodemus and Sadducee Joseph are two vastly different men who are pulled together in a search for truth at the most pivotal moment the world has ever known.

Nicodemus owns a large retail store in the heart of Jerusalem. When Jesus bursts onto the city scene, backing powerful teaching with amazing miracles, Nicodemus is intrigued. He turns to his vast collection of Torah scrolls and, through dedicated study, meticulously begins to compile a list of prophecies that Jesus is fulfilling.

Joseph is a wealthy winemaker on the rise, with access to every luxury Israel has to offer. But wealth can't buy love from his beautiful wife. Initially unconvinced Jesus is the Messiah, he’s reluctantly drawn to Nicodemus’ quest for truth.

From the mind-boggling spectacle of the ancient Passover in Jerusalem with 20,000 sacrifices in a single day, to chariot races in Herod’s Caesarea, to volatile behind-the-scenes Sanhedrin council meetings, it’s a completely new and unique walk through the Christ story.

Holding to historically and culturally accurate settings and Biblically accurate accounts, we experience Jesus’ words and actions—every single one straight from Scripture—in a special and new light.

Read the Christ story again, for the first time!