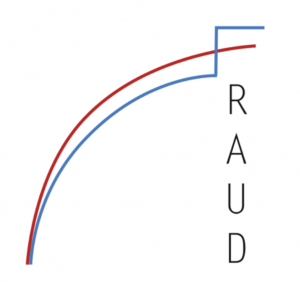 Are we approaching the final battle between heaven and hell or will we dodge this election death-bullet?

President Trump gave a speech last week that he called “The most important speech I’ve ever given.” And true to form, none of the big networks covered it. In fact, if they mentioned it at all, it was dismissed as just “a bizarre, post-election rant” and “baseless conspiracy theories.”

President Trump spoke for 45 minutes, detailing myriads of facts supporting the known fraud that took place during the Presidential vote tabulation. But it was a sentence buried in the middle that was earth-shattering, something of which you definitely need to be aware. He said:

President Trump is stating in no uncertain terms that if Biden stole the election, which he did, he should do whatever is necessary to keep Biden, and those controlling him, from taking office.

So if all else fails, I think he’s saying he will do whatever is necessary keep out the communists. He knows he took an oath to defend this country from our enemies, foreign and domestic. And he takes his oaths seriously. 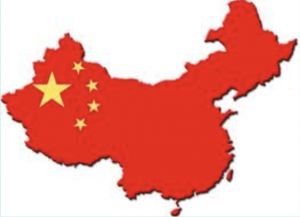 He has proof powerful communist forces are trying to take our country down. He has proof China worked with Biden. He has proof that China is knee-deep in Dominion software. He knows, as does most everyone else, that those behind Biden stole the election.

So if President Trump can’t get this election fraud case to the Supreme Court and can’t stop the states from certifying the electoral college, what does that mean? I doubt President Trump will give up and walk away if he thinks our nation will fall to communists.

On the other hand, if he doesn’t stop Biden from becoming President, it would be far worse. Let’s face it, so much is at stake in the next few weeks…like our country and way of life. That’s no exaggeration.

And our President usually lands on his feet. Up until now you could argue he’s had SOME KIND OF DIVINE PROTECTION based on all that he has been protected from (see "Satan's Flaming Arrows” graphic below). 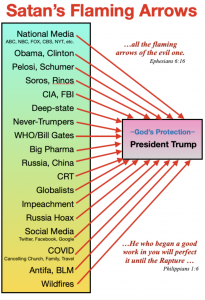 Am I predicting Trump will be forever protected by the Lord? No, of course not. Nor am I saying President Trump is sinless. I'm just pointing out the obvious.

Any way you look at that chart, the Lord has been protecting President Trump until now, so why would we think he won't protect him from this FRAUD ARROW?

So knowing that God has been protecting President Trump in the past should encourage us to pray like crazy—that the Lord will continue to protect and give him and his advisors Godly wisdom during this critical time!

God is always in control. And quite frankly, Christians have dropped the ball in so many areas that we all know we deserve another Obama, like Biden. 🙁

God’s love and protection for us is not dependent on what we do right or wrong. We can, and often do, reap what we sow. Thankfully our Lord is gracious and often has mercy on us.

As far as the east is from the west, so far has He removed our transgressions from us. Psa. 103:12

So I still believe the stolen election will be exposed and the fraudulent votes thrown out. We should know before January 7. And I would be remiss in my duties if I didn’t again mention the importance of praying!

…The effective prayer of a righteous man can accomplish much. James 5:16

The Flame of the Flu Fear 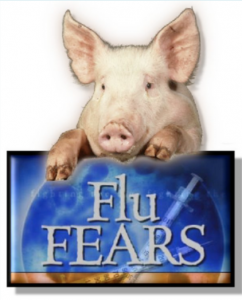 And on the other major front, the COVID vaccine is being pushed like there’s no tomorrow. History may just very well be repeating itself.

Back in 1976, the Swine Flu raised its ugly head and 11 soldiers at Fort Dix contracted it, with one dying. Health officials were dismayed to discover hundreds more soldiers had the antibodies.

Incorrectly determining that the virus was a repeat of the 1918 Spanish Flu where 50 million people died worldwide, scientists immediately projected 50 to 60 million Americans would be infected and over one million would die. The New York Times fan-flamed front page headlines that the 1918 Spanish Flu virus had returned.

The decision was made by then-President Ford to ramp up (rush) a vaccine.(2) 45 million people were vaccinated before it was discovered that hundreds were getting Guillain-Barre syndrome, which causes muscle weakness, paralysis and death. 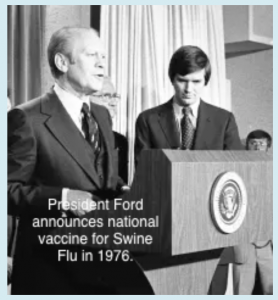 Others were mysteriously dying of heart attacks just after taking the vaccine. The program lost public confidence and was eventually unceremoniously cancelled.

Think about today, the FDA is again rushing a vaccine to foist onto the public. Its own website says to expect "deaths" from the vaccine.(1) Really? (See FDA chart below)

And again we're seeing more and more doctors complaining about this virus and its vaccine. 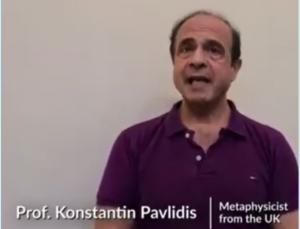 Here's a link to a video of one doc after another from around the world telling us this whole thing is ridiculous.

(If you don't have 30 minutes to watch it, try to come back later, it's quite worth the effort to see.)

And a good resource is American Frontline Doctors. They have a link to be able to access hydroxychloroquine. https://www.americasfrontlinedoctors.com/

As we've said for some time, the FDA is totally compromised and in bed with Big Pharma(10). They think nothing of making kids take a measles vaccine that causes more deaths than lives it saves.(8)

So this is what these fraudsters ARE admitting to:
We have a 99.9% chance of surviving COVID-19 if we don’t take a vaccine, yet we're being encouraged to take an untested vaccine that the FDA says is EXPECTING to have major problems after taking it. Notice death is one of the "adverse outcomes" of taking this vaccine! 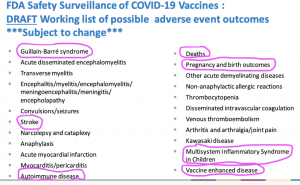 And they have no idea how many of each of the above problems there will be. So they will “monitor” and apparently tell us later. Other articles claim the vaccine will cause infertility in women.(4)

But the word is out, if you don’t take the vaccine, you’re worse than an infidel. Canada's Chief Medical officer says if you don't get vaccinated, you'll lose your freedom. And Bill Gates has already said life will not return to normal until you take his vaccine.(5) So somehow we’ve gone from “14 days to flatten the curve” to “house arrest until you accept socialism.”

The national stimulus package that is being proposed for Americans may have a qualifying twist this time. Instead of $1,200 sent to each taxpayer like the first stimulus, they will instead give you $1,500...if you take the vaccine.(7)

Always remember, Nazism (short for National Socialism) was sold to the public as a benefit, not as enslavement. With 6000 years of practice, Satan is a very good liar.

Socialism has always been attractive to anyone seeking power. Therefore, once they get power, it’s hard to take it back… i.e., Trump trying to take down those who were so close to their socialistic goals they could taste it.

So a lot will be happening in the coming weeks; don’t give up on President Trump's reelection...keep lifting him up in prayer, as well as his legal teams. Due to the known fraud, his team is making legal progress and he’s in a very good position to remain in office.

I know this, if God wants President Trump to continue, he will continue to lead this nation against all enemies, foreign and domestic. 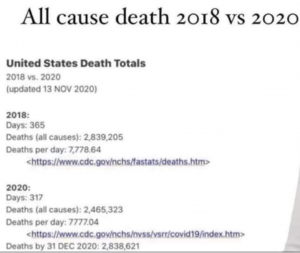