Article: The Pool of Siloam & the Messiah 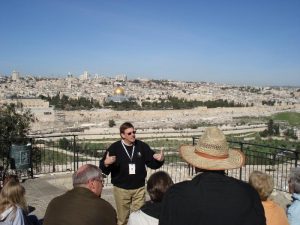 On our trips to Israel, my most fun Bible study to teach is from the top of the Mount of Olives. The view of the Old City is stupendously visually impacting to anyone with even a basic understanding of the Bible.

You can literally see so many of the things mentioned in Scripture like the Garden of Gethsemane, Palm Sunday Road, the Eastern Gate, the Temple Mount where the Jewish Temple stood, Caiaphas’ House, the Garden Tomb, the City of David, Herod’s Palace and so much more.

One of the more interesting observations I like to point out from this breathtaking view from the Mount of Olives is the famous story of Jesus healing a beggar who was blind from birth (John 8:59-9:41).

In a nutshell, Jesus was leaving the Temple compound, saw the blind beggar, picked up some dirt, spit into the dirt and applied it to the beggar’s eyes. He told the beggar to go wash the dirt out of his eyes in the Pool of Siloam. And once he did, he could instantly see for the first time in his life.

The Pharisees came to him to question the beggar about Jesus healing him. They were unmercifully berating the poor guy about how this could have happened, ultimately resulting in the healed man blurting out the now famous words, “All I know is that I was blind but now I can see.” 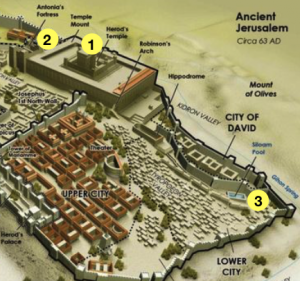 More to the Story
But when you’re sitting on the Mount of Olives reading this Biblical account, you learn there’s a lot more to the story. You can see the place where the stunning Jewish Temple once stood (#1 in the Jerusalem drawing above). Jesus would have been in that area when He healed the blind beggar. Only a couple of hundred feet to the north, just outside the northern wall of the Temple Mount, were the Pools of Bethesda, a relatively short, flat walk (#2 in the drawing).

But Jesus didn’t send him to the Pools of Bethesda. Instead He said, “Go wash in the Pool of Siloam,” which was five times further away down to the lowest part of Jerusalem (#3 in the drawing). For a blind guy, that was a LONG way to go— especially since the Pools of Bethesda were far more accessible.

Why did Jesus send the blind beggar all the way to the Pool of Siloam? Well, as the scripture points out, the Pool of Siloam’s name in Hebrew means “The Pool of the One Who Will Be Sent,” which was, of course, the Messiah. The Jews regarded this pool as prophetic of the Messiah pouring water upon the desert. 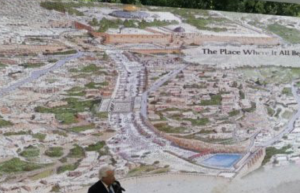 But there’s even more to the story…
Each fall the Jews celebrate the Feast of Tabernacles. The last day of this feast is called “The Great Day of the Feast.” On this day, the priests would perform a special ritual in which the nation would cry out for their Messiah to come.

He then would take the pitcher of water to the Brazen Altar of Sacrifice and pour the water on it while reading Isaiah 44:3 about the future Messiah coming to Israel:

“For I will pour out water on the thirsty land
And streams on the dry ground;
I will pour out My Spirit on your offspring
And My blessing on your descendants;” Is. 44:3

The crowd would fall silent as they prayed for the Messiah to come and pour His Spirit on them. But this particular year, Jesus had come stealthily to Jerusalem without His Apostles. And it was at this moment He boldly broke the prayerful silence by loudly proclaiming:

“...If anyone is thirsty, let him come to Me and drink. He who believes in Me, as the Scripture said, ‘From his innermost being will flow rivers of living water.’” John 7:37-38

The next day Jesus showed up at the Temple and confounded the Pharisees with His incredible oratory. Not being able to answer, they made a deep, deep dig at Jesus being born of fornication—supposing Mary had gotten pregnant before she was married. Then they said He had a demon. Finally they tried to stone Him.

Jesus slipped away from their grasp, and as He left the Temple area he saw the blind beggar sitting on the sidewalk. I have to think Jesus was smiling as He healed him right under their phariseetical noses and then tells him to go wash in the Pool of Siloam—The Pool of the Sent One.

Now you know why Jesus didn’t send the blind beggar to the Pools of Bethesda!