The Last Supper: Who Sat Where? 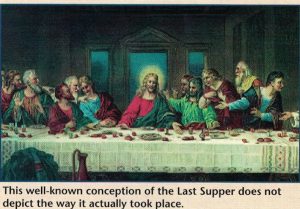 Most Christians are familiar with the famous Leonardo Da Vinci painting of Jesus and His 12 disciples at the Last Supper. Jesus is seated in the middle of the table and six guests on each side of Him. Unfortunately, that is completely wrong! Here's why...

The Type of Table

In Jesus' time, the tables were much different than we see today. The main difference is the fact that usually no chairs were used. During the Roman empire, most banquets were held in a "triclinium." A triclinium was a room equipped with a table that was six to ten inches high and set up in a U-shaped (see drawing below) Configuration. The guests would recline along the outside edge on cushions, while the servants would serve the food from the empty space in the center of the tables. Ancient Roman pictures of tricliniums always depict that the guests reclined on their left elbow and ate with their right hand. Therefore everyone faced the same direction.

In Israel in Jesus' time, most meals would have been eaten sitting on the floor, legs crossed, gathered around one dipping bowl which was shared among everyone. However, the pharisees insisted that every Jew, no matter how poor, had to eat at least one meal a year lying down like the rich, and that was the Passover. The host would need special furniture for the meal because he would have guests as well. At least 10 men had to eat every lamb, according to the pharisees, because there were so many people coming to Jerusalem that there wouldn't be time to sacrifice so many lambs unless they were shared.

And He sent Peter and John, saying, "Go and prepare the Passover for us, that we may eat it." And they said to Him, "Where do You want us to prepare it?" And He said to them, "Behold, when you have entered the city, a man will meet you carrying a pitcher of water; follow him in to the house that he enters. Ans  you shall say to the owner of the house, 'The Teacher says to you, 'Where is the guest room in which I may eat the Passover with My disciples?" And he will show you a large, furnished, upper room; prepare it there." And they departed and found [everything] just as He had told them; and they prepared the Passover. And when the hour had come He reclined [at the table], and the apostles with Him. Luke 22:8-14

The Last Supper took place during Passover, so when Jesus sent John and Peter to make the preparations for their  Passover dinner, He told them that they would find a "furnished" upper room. The word "furnished" is the same word that Josephus used to describe the triclinium. Archaeologists today have also confirmed this U-shaped table configuration and have found many evidences of reclining tables being used in the time of Jesus.

Now one of the Pharisees was requesting Him to dine with him. And He entered the Pharisee's house, and reclined [at the table]. And behold, there was a woman in the city who was a sinner; and when she learned that He was reclining [at the table] in the Pharisee's house, she brought an alabaster vial of perfume, and standing behind [Him] at His feet, weeping, she began to wet His feet with her tears, and kept wiping them with the hair of her head, and kissing His feet, and anointing them with the perfume. Luke 7:36-38

The woman in Luke 7 was washing Jesus' feet with her tears while He was at a meal in the home of a Pharisee. By understanding the triclinuim arrangement, it's much easier to see how someone could wash feet during dinner-she wouldn't have to be under the table!

Who would be seated where?

And there arose also a dispute among them [as to] which one of them was regarded to be the greatest. And He said to them, "The kings of the Gentiles lord it over them; and those who have authority over them are called 'Benefactors.' But not so with you, but let him who is the greatest among you become as the youngest, and the leader as the servant. For who is greater, the one who reclines [at the table,] or the one who serves? Is it not the one who reclines [at the table]? But I am among you as the one who serves. Luke 22:24-27

Luke gives us valuable information as to who sat where. the disciples were having an argument as to who was the greatest as they came into the room. This was because these tables all had a seating order indication the importance or rank of the guests. There was a specific place for the most important guest to sit and a place for the least important guest.

And He {began} speaking a parable to the invited guests when He noticed how they had been picking out the places of honor [at the table]; saying to them, "When you are invited by someone to a wedding feast, do not take the place of honor, lest someone more distinguished than you may have been invited by him, and he who invited you both shall come and say to you, 'Give place to this man,' and then in disgrace you proceed to occupy the last place. But when you are invited, go and recline at the last place, so that when the one who has invited you comes, he may say to you, 'Friend, move up higher'; then you will have honor in the sight of all who are at the table with you. Luke 14:7-10

Here Jesus was referring to the reclining table seating arrangement and indicates that the disciples were familiar with specific seating protocol. Since Jesus was the host, you can determine who was reclining to His right and left side from the clues in the gospel narratives.

Peter, turning around, saw the disciple whom Jesus loved following {them;} the one who also had leaned back on His breast at the supper, and said, "Lord, who is the one who betrays You?' John 21:20

If John leans on Jesus' chest, it means that John was seated directly to Jesus' right in the #3 position (see drawing) at the end of the left wing. When John spoke to Jesus, he simply leaned back on His chest. And that's what John did when he asked Jesus who was going to betray Him.

Jesus gave a great example of loving your enemies to the very end. If Jesus has John leaning on His chest, then Judas had Jesus leaning on his chest. Let's just say that the Lord was heavy on his heart that night, in every sense of the word.

The other position we can reconstruct from scripture is that of Simon Peter. He was located at the end of the table on the right wing, in the position of very least importance.

John was honored with the coveted "right hand of host" seat because he helped carry everything up to the room to make preparations for dinner. Peter may have also expected to be given the position of the guest of honor since he had worked so hard preparing the Passover dinner for a dozen people. He may have also even taken the seat of least prominence, expecting to be moved up based on Jesus' teaching to "recline at the last place." Instead, Jesus gave the position of guest of honor to Judas Iscariot! Judas was probably equally surprised.

The second evidence that Peter was in the seat of least importance has to do with the announcement Jesus made that He was going to be betrayed by one of His disciples. Peter must have been in the position of least importance or he could not have caught John's eye. Peter is the only person that John could easily see from his position at Jesus' right (see drawing).

When Jesus had said this, He became troubled in spirit, and testified, and said, "Truly, truly, I say to you, that one of you will betray Me." The Disciples {began} looking at one another, at a loss [to know] of which one He was speaking. There was reclining on Jesus' breast one of His disciples, whom Jesus loved. Simon Peter therefore gestured to him, and said to him, "Tell [us] who it is of whom He is speaking." He, leaning back thus on Jesus's breast , said to Him, "Lord, who is it?" Jesus therefore answered, "That is the one for whom I shall dip the morsel and give it to him." So when He had dipped the morsel, He took and gave it to Judas, [the son] of Simon Iscariot. And after the morsel, Satan then entered into him. Jesus therefore said to him, "What you do, do quickly." Now no one of those reclining [at the table] knew for what purpose He had said this to him. John 13:21-28

Peter motions to John to ask Jesus who it is that will betray Him. John leans back on Jesus' chest and quietly tells Jesus that Simon Peter wants to know who is going to betray Him. Jesus answers that it is the disciple sharing a bowl with Him, which would have been Judas.

The third evidence for Simon Peter's location is the fact that it is customary for the person in the position of least importance to offer to wash the other guests' feet. But Jesus took the towel and the basin and washed Peter's feet! If Peter was in the position of the foot washer, it makes more sense that Peter didn't want Jesus to wash his feet! Also, with Peter being seated at the end of the row it would have made it easy for Jesus to begin the foot washing with him, illustrating His "greatest shall serve the least" teaching.