The Identity of the Two Witnesses

And I will grant authority to my two witnesses, and they will prophesy for twelve hundred and sixty days, clothed in sackcloth. Rev. 11:3

Most people who study Bible prophecy are well aware of the “Two Witnesses” — the two fascinating Jewish men who emerge post-Rapture at the beginning of the 7-years of God’s wrath on earth. Most of what we know about them is in Revelation 11.

Dressed in interesting sackcloth attire, they arrive at the beginning of the Tribulation just after the Rapture. Based in Jerusalem, they’re an impressive presence for 3 1/2 years on the world’s stage. Their first assignment is to show where the Temple is to be rebuilt on Mount Moriah (Rev. 11:1-2).

They have the ability to cause droughts and plagues in specific places around the earth, and even turn fresh water into blood (Rev. 11:6). 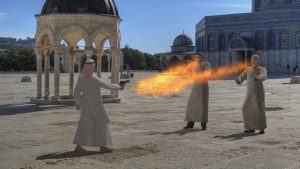 They become quite the tormentor to the non-Jews who are still alive on the earth. And if someone tries to hurt them, they can spew fire out of their mouths devouring their enemies. An impressive defense, to say the least (Rev. 11:5).

Ultimately Satan himself, after being thrown down to the earth from heaven (Rev. 12:9), is finally able to kill them and the world explodes in celebration over their death (Rev. 11:10).

Their dead bodies are left uncovered in the street for the world to see. But God takes the opportunity to show they were His chosen instruments by audibly calling them to stand up… and then slowly lifts them into the sky in front of their dumbfounded enemies (Rev. 11:11-12).

Satan then has full control of the earth for 3 1/2 years, although God’s angels make Satan and his followers miserable through the constant release of the Lord’s undiluted wrath (Rev. 16).

The identity of the first witness is not in question. One of the last things recorded in the Old Testament says:

Behold, I am going to send you Elijah the prophet before the coming of the great and terrible day of the LORD. Mal. 4:5

Elijah was the prophet who departed the earth alive in a whirlwind (2Kings 2:11). The Jews have been looking for Elijah to return since this prophecy was recorded around 487 BC, some 2500 years ago.

Even today at the Passover meal, most Jewish families set a place for Elijah at the table. Then just before time to eat, they send the kids to open the front door to see if Elijah has arrived for dinner.

The 2nd Witness is heavily debated, but to me it should be obvious. So let’s look closely at the three best possibilities.

Some people believe the 2nd Witness will be Moses. It does seem like a natural fit since one of the Witness’ miracles will be turning water into blood—like Moses did during the Egyptian Exodus. And also Moses was seen standing next to Elijah on the Mount of Transfiguration (Matt 17:1-3).

But Moses is an unlikely candidate because he has already died. God even said He “buried” him. Seems unlikely that God would make Moses die twice but not Elijah (Deut. 34:5,6).

If in fact Elijah is one of the two, we probably should look at people who have yet to die an earthy death—and there are two in the Bible.

Enoch is mentioned in only 12 verses in the Bible but he was very special having been born in the 7th generation from Adam. He lived 365 years before, like Elijah, he was taken from the earth without dying because he “pleased” God (Gen. 5:23-24, Heb. 11:5).

However, whereas Elijah was bodily removed, Enoch was sort of raptured/translated. Not sure you can go back to being a living/breathing human with blood in the veins after being raptured.

But the main problem with Enoch is that he’s not Jewish, having lived long before Abraham, even before the worldwide flood. I can’t imagine the Jews following anyone who is not Jewish.

John, the author of John, 1John, 2John, 3John and the book of Revelation, is almost certainly the 2nd Witness. He was in Jesus’ inner circle of friends and John was intimate enough with Jesus that he loved to lean back against Jesus’ chest during feasts and important reclining meals (John 21:20).

There is recorded history of the death of every Apostle of Jesus, except John. Each of the other Apostles are known to have died horrible deaths. John was the lone exception.

It is widely recorded in history that in Ephesus in 96 AD, when Roman emperor Domitian commanded that the Apostle John be boiled in oil, John just continued preaching from the pot. People only ASSUME he died and then speculate he died in Ephesus, or Patmos...but it’s only speculation.

In the last chapter of John’s Gospel account, he recorded a conversation between Jesus and His Apostles about how each would die. At one point Peter asked about how John would die, and Jesus answered:

Jesus said not to worry about how John would die because he would remain alive until the time of Jesus’ return. The disciples thought Jesus had said John wouldn’t die, but Scripture then corrected that misconception saying:

Therefore this saying went out among the brethren that that disciple would not die; yet Jesus did not say to him that he would not die, but only, “If I want him to remain until I come, what is that to you?” John 21:23

This may have been part of the reason Jesus assigned John to watch over His mother, knowing John would outlive her (John 19:26,27).

John also records a prophecy that in the future he would stand before kings regarding nations and peoples. This is an unfulfilled prophecy.

And they said to me, “You must prophesy again concerning many peoples and nations and tongues and kings.” Rev. 10:11

To me this is a no-brainer. But what may have caused confusion through the years is the man-made paragraph break between the end of Revelation 10 and the beginning of Revelation 11.

Paragraph breaks were not in the original scriptures but were first inserted by Archbishop Langton of Canterbury in 1227. Verses were added 300 years later by Robert Estienne.

Langton was definitely not under the influence of the Holy Spirit when he divided up the Bible into chapters as some of the chapter breaks have proved to be disastrously misleading.

In this case if he had simply backed up one verse and started Revelation 11 with the last verse of Revelation 10, no one would have missed the obvious connection! You would have John saying he was to preach to the Kings of the earth as one of the Two Witnesses! Reading 10:11 as the beginning of 11 would then be read together like this:

And they said to me, “You [John] must prophesy again concerning many peoples and nations and tongues and kings. Then there was given me a measuring rod like a staff; and someone said, “Get up and measure the temple of God and the altar, and those who worship in it. Leave out the court which is outside the temple and do not measure it, for it has been given to the nations; and they will tread under foot the holy city for forty-two months. And I will grant authority to my two witnesses, and they will prophesy for twelve hundred and sixty days, clothed in sackcloth.” Rev. 10:11-11:3

So there you have it, Elijah and John are the Two Witnesses. One from the Old Testament and one from the New Testament, neatly tying the entire Bible together—the Law in the Old tied to Jesus in the New. This is hugely important because in the Tribulation the Two Witnesses and the 144,000 Jewish Evangelists preach that Jesus is the Lamb of God, the Messiah (Rev. 14:4;15:3).