...to bring to light what is the administration of the mystery which for ages has been hidden in God who created all things. Ephesians 3:9

The first thing Noah did when his family walked off the ark after the flood was to make a blood sacrifice to cover their sins (Gen. 8:20). This necessity of shedding blood to atone for man’s sin (Lev. 17:11) was later incorporated in the Levitical law (Lev. 16). So for over 1500 years God’s Law demanded, and the Israelites furnished, blood sacrifices.

Then, as prophesied, the Lord God came in the flesh and shed His blood on the cross as a permanent sacrifice (Eph. 1:7), ending the necessity of sacrifices for sin. Paul of Tarsus was chosen to take this Good News to the world that a great “mystery” had been revealed... that Jehovah God no longer demanded blood sacrifices because all sin had been “paid in full” by Jesus on the cross (Col. 2:13-14) and now God the Spirit was able to come to earth to permanently indwell Born-again Believers (2Cor. 1:22).

God’s Spirit coming to the earth ushered in a completely new time period we call the Church Age. It will end when God’s Spirit leaves the earth, called the Rapture. In order to correctly understand your Bible in the correct context, you MUST determine the time period each verse is referencing/discussing. Otherwise, you can very easily take a verse totally out of context. 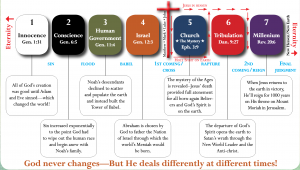