The Father of Lies

I’ve been posting on our website a series of lectures called Satan’s Top Ten Lies. The five topics I’ve finished so far are quite varied and we’ve received a lot of comment, sometimes encouraging, sometimes critical, but always enthusiastic!

Sadly these five topics are rarely discussed seriously in church, Sunday School or even in small-group Bible studies. And often they’re avoided.

The lies through which Satan deceives the non-Christian world are understandable. Satan has been the great deceiver now for some 6000 years, blinding people from the truth.

But what amazes me most is how many Believers have been duped by these lies. And they are lies! Have you been duped?

The Bible says God hates divorce. Yet divorced men are no different than those never divorced. All are sinful, all are forgiven and all are cleansed by the shed blood of Jesus.Yet many churches absurdly think a repentant murderer could be qualified to be an Elder, but never someone who is divorced.

When most Christians talk about their goals for their daughters growing up, they would love for them to go to college to be trained in a professional career, making the big bucks. The Bible disagrees and says that’s a lie from the pit of hell.

Oh how Satan has duped Believers with birth control. Rarely is found a couple who seeks after the eternal benefits of having as many children as possible. Not to mention most women, Christian and non-Christian, don’t realize that most birth control pills are “abortifacients” (from Latin meaning “that which causes a miscarriage.”) Ovulation is not always suppressed by birth control pills. Most of the time the pill works 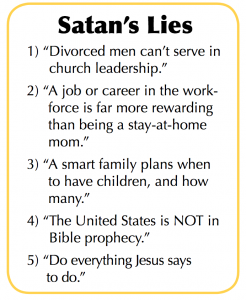 by aborting the fertilized egg, flushing out the newly-created baby made in God’s image.

In the prophetic area, Satan proves true the adage that if you repeat something often enough, it will be considered truth. But the truth is that the United States IS in Bible prophecy! There are some 20 to 25 verses about an end-time nation that can only be referring to the United States!

And lastly, the most recent post, Lie #5, shows how Satan has craftily kept most Believers in the dark regarding how to read and interpret scripture. If you try to “do every-thing Jesus says to do,” you’ll be quite disheartened! Understanding who Jesus was addressing while on this earth is paramount to Christians rightly dividing the Word. (2Tim 2:15)

These five scripturally supported presentations are available now in the Compass folder in the compass.org store (click on Store, then Complete Compass Video Library, then Compass).

And if you don’t have a computer or Internet access, we’ll mail you any or all for a donation of any amount. Just call or email us. If you take the time to view them --  they’ll give you solid scriptural and scientific facts to think about, not biased theory.

And to throw in an extra bonus for those who’ve hung in there and read this far . . . we want you to see what great resources are available to you at compass.org. So you can go into the Store and choose any two of our over 350 titles available in the Complete Compass Video Library and download them for FREE. Use the discount/coupon code “FREE2” when you “check out” and they will be free, no credit/debit card required.