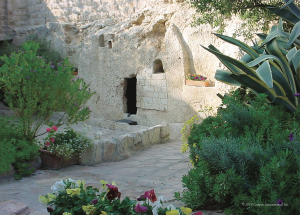 [I]f Christ has not been raised, then our preaching is vain, your faith also is vain. 1Cor 15:14

The resurrection of our Lord was just as important as His dying on the cross. Through the years, many were crucified on crosses, but only One defeated death, and permanently rose from the dead. Muhammad, Confucius, Joseph Smith and a long list of wannabes are all rotting in their graves.

On every Israel trip Compass takes, we visit the Garden Tomb, the powerful place of Jesus’ resurrection. Even though the overseers of this incredibly beautiful and scripturally accurate location are careful not to claim that this is absolutely the spot, anyone who visits there knows better. God has obviously preserved this garden for 1800 years from the clutches of the Catholic Church.

The story of the discovery of this tomb, after being lost for so long, is remarkable. By the 19th century, most of the existing Christian sites were managed by either the Roman Catholic Church, the Greek Orthodox Church, The Russian Orthodox Church, or a combo of two or more of them. Scores of sites like the place of Jesus’ multiplication of the fishes and the loaves, the location of the sermon on the Mount, the place where Jesus sweated blood in the Garden of Gethsemane, Jesus’ birth spot in Bethlehem, and the empty tomb had been determined and designated by Constantine’s mother, Queen Helena. She visited Israel around 327 AD, some 300 years after the events occurred. Many of her “Holy sites” have been discredited as archeological evidences have come to light disproving them.

Queen Helena’s chosen site for Jesus’ burial place crucifixion and, based on 300-year-old hearsay, is totally off the mark. It’s located not on a main road but on a side road near the wall of the Old City of Jerusalem across the Valley of Cheesemakers (not on Mt. Moriah!). And it’s not near one of the Old City of Jerusalem’s gates. Romans used crucifixion as a deterrent and always crucified people on main highways coming in and out of the city through it’s gates. And they would locate the crosses far enough away from the city walls to hold down the noise and smell for the residents just inside the wall.

Stoning people to death was the Jewish method of killing those who broke certain Biblical laws, and from numerous sources we know this area just outside of the northern Damascus Gate, where Golgotha and the garden tomb lie, was a stoning area. That was certainly likely because a limestone quarry, dating back to Solomon, was located there with lots of rocks conveniently lying around. Interestingly, up until the crusades, the Damascus Gate was called St. Stephen’s Gate, which would fit well with the stoning of Stephen. But despite this and other inconsistencies to the Bible account, the Catholic Church of the Holy Sepulcher site stubbornly claimed to be where Jesus was crucified and buried. 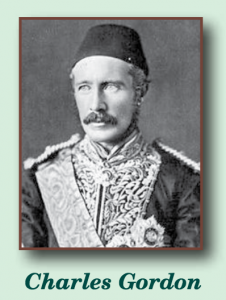 In 1883 the highly decorated British General and Bible student Charles Gordon was looking out his window from near the Old City wall and noticed the distinct skull outline on a nearby rock face. Knowing the problems associated with the Catholic empty tomb site, and reading the details about the empty tomb in Scripture, Gordon searched around the skull face area and discovered a tomb had been excavated some 16 years earlier by a Greek man searching for a water cistern. Upon closer examination, he realized that every detail of this tomb fit the Biblical account, and that it could actually be the REAL tomb. He soon returned to England to raise the money to purchase the area. But two years later, before he raised enough money, Gordon was murdered by Muslims while on military duty in Africa.

Finally, nine years after Gordon viewed the rock skull face from his window, a group formed “The Garden Tomb Association” and finished raising the money to purchase the tomb and the surrounding area. As they began to excavate the area, they found the third largest cistern in Jerusalem along with an impressive winepress. Truly it was part of a magnificent garden and whoever had owned it was quite wealthy!

Today, Gordon’s Garden Tomb area is beautifully preserved and has a fascinating calmness that is hard to describe. It is the only known place that totally fits scripture to the last detail. Several noted archaeologists have examined it and declared it to be Jewish and of the Herodian Period (time of Jesus). It even has a Roman spike above where the rolling stone would have been sealed by Pilate and a 2000 year old earthquake crack! It’s a place every Believer should visit! 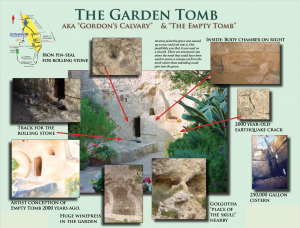 Scriptural Evidence for the Garden Tomb

It was cut into solid rock and the place for the feet was finished only on one side.

It’s located in the vicinity of the Damascus Gate.

Part of a huge and expensive garden.

It was a rolling stone tomb.

The tomb was nearby the “place of the skull” (Golgotha/Calvary).

The grave had a “right side” chamber for placement of bodies.

The tomb would have been cut for a wealthy man.

Located on a main road.

Matt. 28:2 “And behold, a severe earthquake had occurred, for an angel of the Lord descended from heaven and came and rolled away the stone and sat upon it.”

There is a 2000-year-old earthquake crack.

There is a 2000 year-old iron pin at a height consistent with the size of the rolling stone.