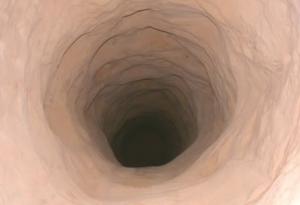 The Bottomless Pit is prominent in the account (not a parable) of the rich man and Lazarus in Luke 16. There we find that prior to the cross, the bottomless pit had two sides called Paradise and Hades.

Prior to the cross, when a person died they went to one side or the other, depending on their eternal destiny. Today, when Believers die post-cross they go straight to heaven because Jesus paid it all.

we are of good courage, I say, and prefer rather to be absent from the body and to be at home with the Lord. 2Cor. 5:8

Paradise was the good side of the Bottomless Pit—it was basically a slice of heaven where all the saved people who died prior to the cross waited until they could go to the 3rd heaven. 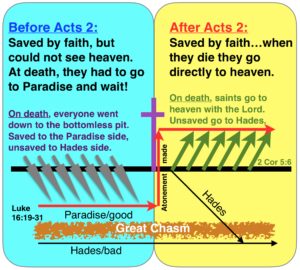 No human can enter heaven without having atonement for their sins, so saved people before the cross had to wait in "Paradise" until the Messiah came to redeem them.

That means for 4000 years all the Old Testament saints were hemmed in on the Paradise side of the Bottomless Pit until Jesus provided a way out through His sacrificial blood.

Think about it…that must’ve been quite an interesting group of people waiting for the Messiah to cleanse them. Adam, Eve, Noah, Abraham, Isaiah, Daniel, David, Solomon…and millions more through the millenniums who were trusting God’s Messiah would come to redeem them.

When the saints in Paradise learned Jesus had died on the cross to pay for their sins, the booming jubilation roar would have been so great it could have been the reason the ground shook in Jerusalem. 🙂

the earth shook and the rocks were split. Matt. 27:51b

The other side of the Bottomless Pit, separated by a chasm, was Hades. Hades is the horrible habitat of all the unsaved people who are waiting for final White Throne Judgment. 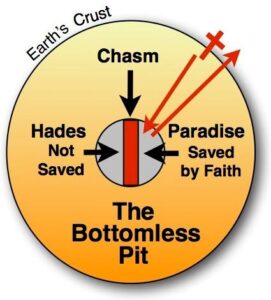 They'll have to stand before God, and without Jesus’ shed blood to cleanse them they’ll have to pay the price for all their sins.

Bummer for them. All will be found guilty and thrown into the lake of fire to burn forever.

These are the demons from the days of Noah whose actions were so vile God had to destroy all mankind except Noah and his family.

The Nephilim were on the earth in those days, and also afterward, when the sons of God [demons] came in to the daughters of men, and they bore children to them. Those were the mighty men who were of old, men of renown. Gen. 6:4

The Nephilim were the result of these demons mating with humans. Their DNA was permanently changed from God’s original design, so God had to destroy the earth.

God then locked up these horrible demons in Hades. We have an interesting account of Jesus interacting with demons next to the Sea of Galilee.

A man was possessed with numerous demons named Legion. The demons pleaded with Jesus not to send them to the abyss, referring to Hades.

They were imploring Him not to command them to go away into the abyss. Luke 8:31

So the demons in the abyss are the most vile of all the demons, so vile even the other demons didn't want to go there!

All the other fallen angels/demons still roam the earth today. But they're under Holy Spirit restraint during the Church Age dispensation in which we live.

However, the Rapture causes this Godly restraint to be lifted and all hell will break loose. Satan, who is all about death and misery, will cause billions to die. It will not be a good time to be alive on the earth!

But it gets even worse. During the Tribulation the hideous demons locked up in Hades are re-released from the Bottomless Pit. They come up and out of Hades through a shaft and into the earth.(1) I'm guessing it's located under the Giza pyramid in Egypt.

It’s interesting that in the days of Noah the demons changed the genetic make-up of humans. The Bible says that the days just before the Rapture will be "just like" those days of Noah.

For the coming of the Son of Man will be just like the days of Noah. Matt. 24:37

Hmmm, isn’t that what we see today? Satan is subverting God’s creation by changing the human genome through va((ines that change your DNA.

This va((ine-caused change results in such a mess in the Tribulation that those alive would rather die than live—but can’t. Hard to understand but they don’t even have the power to kill themselves by committing suicide.

And in those days men will seek death and will not find it; they will long to die, and death flees from them. Rev. 9:6

There’s no telling what’s actually in those Globalists'/Satanists' mandated va((ines and what kind of control they will allow Satan to have over people during the Tribulation. It's incomprehensible evil.

Thankfully, Believers will be rescued prior to God's wrath!

…and to wait for His Son from heaven [in the Rapture], whom He raised from the dead, that is Jesus, who rescues us from the wrath to come. 1Thess. 1:10

So we’re grateful we won’t have to deal with the demons from the bottomless pit. Spread the word!

(1) NASB notes: The literal Greek translation of “key to the bottomless pit” is “key to the shaft of the abyss.”

If you only have a little time,
watch this one first!

This is amazing insight into the medical industry's death-train coverup. Fraudulent trials, manipulated and suppressed data, and ignoring the facts will come back to haunt doctors who persisted in pushing va((ines.

The globalists’ war on nations has entered its final stages and many are ready to fall like dominoes. Before you can “build back better,” according to the slogan of the World Economic Forum, you must burn everything down. Excellent article by Leo Hohmann.

Exposing Horrors In The Medical Industry

Why Globalists Hate Christians So Much 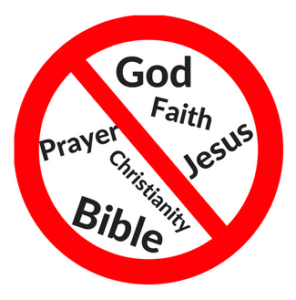 They used to hide behind terms like “white supremacists,” “conservative fascists,” “violent extremists,” “domestic terrorists” and others. But now they openly identify their real target: Bible believing Christians.

The Global Plan For Infertility

Great documentary video showing WHO’s global plan to use vaccines to reduce global population. God knows all this and they'll not enjoy the Judgement Day penalty.

This is a very eye-opening interview regarding the Federal Reserve—what it is and where it came from. Mel K interviews Ed Griffen, author of The Creature from Jekyll Island. 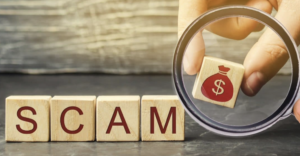 The following are quotes from an article by Nick Giambruno in International Man.

The foundation is being laid to create a totalitarian system to track, control, and tax carbon—an element that touches every activity of human life.

Carbon credits are merely a way for governments, central bankers, and their allies to control the populace and secure continued seignorage* as the fiat currency system flounders.

Imagine if someone in your neighborhood forced everyone to buy "breathing credits" from him, which grant you the privilege to breathe a certain amount of air.

And that, naturally, it would cost your neighbor nothing to create as many of these "breathing credits" as he wanted. He could also hand them out to his friends and others who did favors for him, creating a corrupt patronage system.

This is basically what governments plan to do with carbon credits. Except they are also gaslighting you by telling you they are helping save the planet.

Without that patina of propaganda—which the media, academia, and the rest of the establishment reinforce—there's a good chance the people would revolt.

It’s the biggest scam since the indulgences of the Middle Ages.

*"seignorage"- profit made from a government issuing currency

If you use a cell phone, you need to read this article!!! Susie and I began powering down our cell phones and tablets at night and we're sleeping better. We also got some phone cases that block the radiation. Seems to help.

Looks like there are few information outlets left that you can trust for unbiased news. They're playing the public big-time and have been for decades!

Well, reluctantly I give this link to a podcast interview I gave a couple of months ago. No new info here but some have asked to hear it. I cover several subjects and you'll mainly just see why I write but rarely speak. 🙂

The Biden/Brandon/Globalists/Satanists regime want to do what no foreign power could accomplish...take out 250K troops in one day. Whose side are they on? Asking for a friend...

Why So Many Flight Cancellations Worldwide?

Commercial airline pilots have to be tested every six months. What we're now experiencing after mandatory va((ines for pilots is almost beyond belief. Tens of thousands of flight cancellations worldwide due to pilot shortages. I think it's safe to conclude the Globalists/Satanists want to severely restrict air travel. 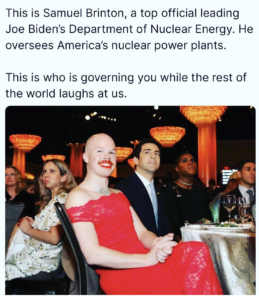 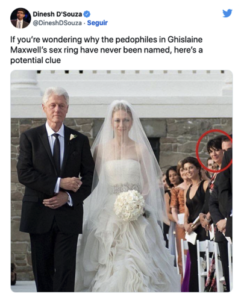 Regarding the BA.5 Omicron variant: 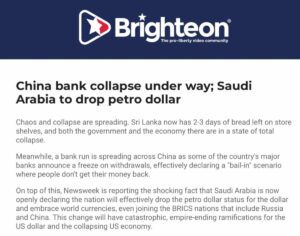 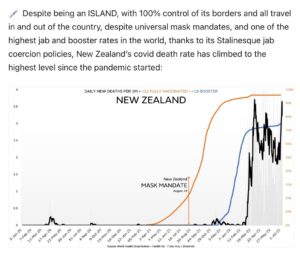 The U.S. Government continues to hide its data, but Europe not as much...two interesting charts regarding European pro-athletes: 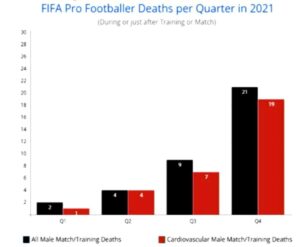 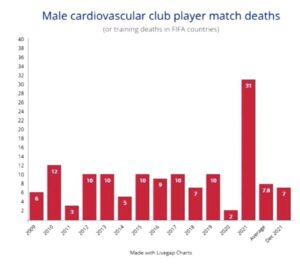 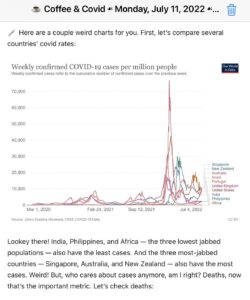 Below is an actual currency note currently being used in Zimbabwe. Their government recklessly spent money they didn't have, thus causing severe inflation. This WILL happen in the U.S., it's just a matter of time. 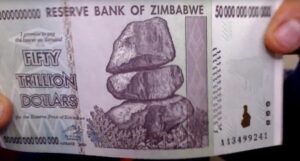 We already see the formation of this coming New World Order through the U.N. and the World Economic Forum (WEF).

Without firing a shot, they have gained the allegiance of most world leaders for their Marxist plans to enslave the people of the world.

The globalists believe they have the means to reshape the world according to their agenda via the influence they have gained over the global leaders of our day.

A one-world government will be birthed once the Church vacates! The players are in place. Time is winding down and we will be whisked away very soon.