Article: Signs For The Shepherds 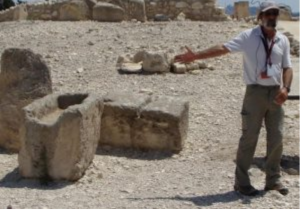 Signs For The Shepherds

—The Rest of the Christmas Story

Luke 2:7 And she gave birth to her firstborn son; and she wrapped Him in cloths, and laid Him in a manger, because there was no room for them in the inn.

The birth of Jesus is a story most of us know well. Joseph and Mary, who was nine months pregnant, had traveled from Nazareth to Bethlehem to register for a census.

When they arrived in Bethlehem, they found there was no place for them to stay. Mary goes into labor, has her baby and places Him in a manger.

One of the things you learn when you go to Israel is that our American conception of a “manger” is not very accurate. It certainly wasn’t cute and wooden. 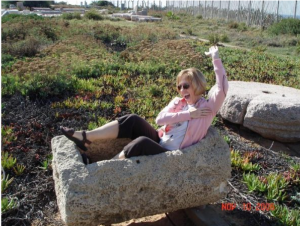 A “manger” was a “feeding trough” and they were always carved out of stone. They didn’t make them out of wood because food and water would cause them to rot. We see these feeding troughs all over Israel (see picture of a stone manger).

But something most people miss about the Christmas story are some hidden gems in this verse:

“This will be a sign for you: you will find a baby wrapped in cloths and lying in a manger.” Luke 2:12

We’ve written before about Jesus being born in Bethlehem in the middle of all those sheep being born and raised for the Jewish Temple sacrifices. Jesus was even referred to by John the Baptist as the “Lamb of God.”

That would have been quite a statement to the Jews whose lives revolved around sacrificing tens of thousands of lambs each year to cover their sins.

But to the shepherds in the fields, why did the angel of the Lord say the baby “wrapped in cloths” would be a sign? As it turns out, it was a HUGE sign!

In the time of Christ, during the birthing season, Levitical Priests would be sent from Jerusalem to Bethlehem to watch over the birthing process to make sure the sheep were born without any defects. 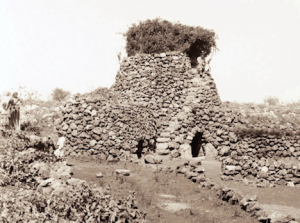 On the edge of the fields surrounding Bethlehem where most of those sheep were being born, there was a two-story stone tower called the Migdal Eder tower. Israeli archeologists recently found this tower. The picture is of the recent archeological excavation.

This tower is mentioned in the Book of Micah regarding the announcement of the birth of the Messiah.

In plain English this is saying that the Messiah will be revealed from the Migdal Eder—“the tower of the flock.”

The priests would climb the tower and look out over all the flocks to see any signs a sheep was about to give birth. Sheep usually get fidgety, paw the ground and/or separate themselves from the flock just before birthing a lamb. When the signs were noticed, they would bring the sheep to the tower’s ground floor where it would give birth in a ceremonially clean area.

When the the lamb was born and if it was without blemish, it was immediately wrapped in strips of cloth made from old priestly underwear. The purpose was to make sure the lamb would stay unblemished. The priest would then put the lamb in a manger to keep it safe from getting trampled.

So when the angel of the Lord told the shepherds in the field that the Savior had been born and the “sign” was He would be wrapped in the same cloths as the sacrificial sheep and placed in a manger, they would have immediately understood the significance of the “sign.”

When the angels had gone away from them into heaven, the shepherds began saying to one another, “Let us go straight to Bethlehem then, and see this thing that has happened which the Lord has made known to us.” So they came in a hurry and found their way to Mary and Joseph, and the baby as He lay in the manger. Luke 2:15

It’s obvious that the shepherds knew exactly where to go with only limited info—they headed to the birthing tower where they found Joseph and Mary with Jesus lying where sacrificial sheep would lie.

And, of course, don’t miss the fact that the first clothes Jesus wore were the clothes of a priest!

So when you hear the Christmas story this year, we hope you have the chance to share, as Paul Harvey would say, “The rest of the story.”