In our travels to Israel, the one thing that stands out to most Believers for the first time is the Jewishness of the Bible. Christians in America tend to think of the Bible from our western perspective, despite the Old Testament and the first four books of the New Testament being written about the Jews living in Israel.

So it’s not surprising that we can learn a lot from the quite specific steps involved in a Jewish wedding. Even a casual observer sees that the events of a Jewish wedding closely parallel the Church’s future wedding with Jesus. You’ll have to agree that the chart below shows fascinating insight into the Believer’s future! 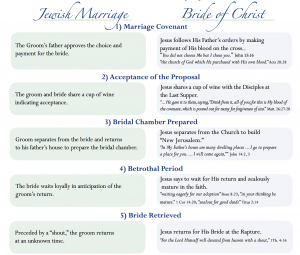 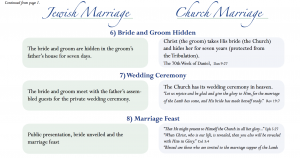 So what do we learn? We learn that, for the moment, Jesus is away building our future home. Since He built the earth in six days, working on our future home for almost 2000 years means we will be dumbfounded at our future digs!

We also see clearly that there is a future seven-year Tribulation with the Church missing from earth. Another nail in the coffin of the mid-Trib and Amillennial theories.

Many thanks to Andy Woods, Paul Van Noy and Lambert Dolphin who have taught about the prophecy parallels in Jewish weddings