Ramping Up To The Rapture

“But of that day and hour no one knows, not even the angels of heaven, nor the Son, but the Father alone.” Matt. 24:36

Whenever someone quotes me the above verse as proof-text that we can’t know when the Lord’s return is near, my old knee-jerk reaction was to want to slap the non-dispensational nonsense out of their head.

But through the years I’ve learned to take a deep breath and be thankful they’re one of the few people willing to discuss Bible prophecies! Even if they have some stuff mixed up.

That Matthew verse is NOT written to you and me living in the Church Age. It was Jesus addressing the Jews during His time on earth, which was a different dispensation/time period.

When you break down that verse, it not only says that no human or angel knows the day and hour, but even Jesus Himself didn’t know the day or hour!

This was true when it was originally written, before the cross. However, later we see Jesus qualifying to receive all knowledge in Revelation 5. So it’s NOT a true statement today.

Today Believers live in the Church Age and have a lot of advantages. The main one being that the Holy Spirit of God lives IN every Believer from the time of conversion until they transition to heaven (Rom. 8:38-39). And the indwelling Holy Spirit is our illuminator of scripture.

Now we have received, not the spirit of the world, but the Spirit who is from God, so that we may know the things freely given to us by God. 1Cor. 2:12

So here’s a verse that WAS written to you and me living in this Church Age about watching the signs of the approaching Rapture:

But you, brethren, are not in darkness, that the day would overtake you like a thief; for you are all sons of light and sons of day. We are not of night nor of darkness; 1Th. 5:4

So a solid, maturing Believer should clearly see the signs when the Rapture’s getting close. Granted we still won’t know the day or hour because that depends on where you are in the world—since there are always two days and different hours going on all over the earth.

Nevertheless, when we’re whisked away at the Rapture, it begins one horrific 7-year period when billions of people die from starvation, disease, plagues and drugs.

So from this we know that when God’s wrath is close, the Rapture is closer.

The Lord knew we would be watching the signs of the coming Tribulation. He knew we would see it getting closer and closer. So He also gave us a wonderful promise…sort of like a rainbow in the sky:

He wanted us to know beyond a shadow of a doubt that He will rescue us before His wrath.

And He continued in 1Thessalonians with:

Therefore encourage one another and build up one another, just as you also are doing. 1Th. 5:11

So seeing the approaching horror at our doorstep just means we should be encouraged. It means we’re that much closer to something happening that has never happened before—millions disappearing in a nano-second.

The same thing happened at the time of Noah. It had never rained before the flood (Gen. 2:6). So despite Noah preaching for 120 years to repent and turn to God in order to miss the coming flood, people just couldn’t/wouldn’t believe it.

People today refuse to believe the Rapture will happen. When God finally does shut the door with the Rapture, it will be too late to escape unimaginable coming despair. 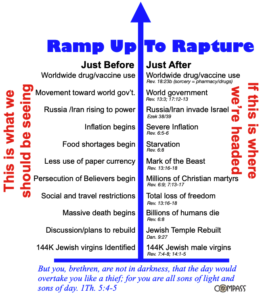 The chart above shows what we know from scripture is coming after the Rapture. So it makes perfect sense that if the Rapture is close then we should be seeing all of those prophecies beginning to come together.

It may get a little nerve-wracking as we get closer to that fateful day, seeing the noose tightening all around us. But God has promised us and we have to trust Him.

Trust in the LORD with all your heart and do not lean on your own understanding. Prov. 3:5

For most of us, truly trusting God by faith as we begin to see the world falling apart will be tough. And as the chart shows, we may very well see the beginnings of death and destruction prior to the Rapture.

But what a great opportunity to be able to say as a witness to non-Believers, “Yes, all this was prophesied in the Bible.” It might start a great conversation! 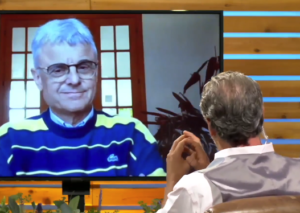 According to Del Bigtree, who has several hundred thousand views of his program each week, this is THE most important video interview he's ever recorded.

According to Geert Vanden Bossche, who early nailed the problems with the va((ine, massive deaths will begin occurring in May and June (soon/now) and ultimately reach into the billions—a worldwide culture-ending catastrophe. Jeepers!

If this is true, and it may very well be, then no wonder Biden's handlers want a war — to cover up what's coming. Both the crash of the dollar and the impossible-to-hide massive death counts.

I cannot tell you how important this video is. Very much worth the time to watch!

Steve Bannon with Ed Dowd show excess deaths without Covid are off the charts! I'm willing to bet most are va((inated, but they won't tell.

Doc Castrates WHO In 4-Minutes 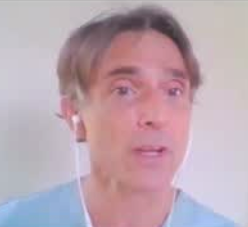 In a kicked-back, matter-of-fact explanation, here's everything you need to know about the WHO (World Health Organization).

BTW, as we announced last week, WHO is trying to get control of all the world's health systems, including the USA's. This way non-elected Globalists/Satanists can dictate what, when, where and how everyone will have to deal with the next (coming) fake pandemic. Biden is trying to give them this control. Can you say "No vax, no food"? 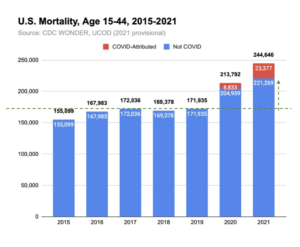 In a report that must be sending Big Pharma off-the-rails, Jeff Jaxen shows Del Bigtree the hard facts confirming you're worse off if you're va((inated!

Why The Globalists Have To Have A War With Russia

The Globalists/Satanists are doing everything they can to go to war with Russia...because it will give them ultimate control forever...well, at least until the Rapture.

More WW3 unbelievable information in a Sarah Westall interview of Senator Black...like drinking out of a fire hose! CQLJ! 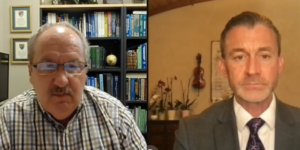 This one will break your heart. Drs. Hooker and Cole explain the long- and short-term effects from va((ination. Do you think a four-foot-long blood clot is normal?

Pfizer and the FDA fought hard in court to hide these documents and now we know why. They illustrate a clear picture that the mRNA shots would cause considerable harm to patients. The documents show, without a doubt, criminal intent to harm. And that they hid the fact the va((ines only worked 12% of the time, not 90%. Jerks.

Movie - This movie is no longer free, sorry! But you can purchase it
CLICK HERE

In case you missed seeing this—proof, yet again, that the 2020 Presidential Election was a fraud. This is good to know because there is no reason to believe they won't do it again.

Quietly they're letting the word out that food and fuel should be stockpiled. Hmmmm....

Below, the CDC’s Week 16 “Underlying Cause of Death” Mortality Rate for the US shows that we're experiencing historically high levels of excess mortality. Hello, come in CDC...is anyone paying attention? 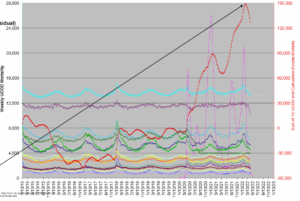