Messy in the Meantime

Truth seemed elusive to Pilate when he talked to Jesus at the Antonia Fortress and it’s still hard to discern today. So it’s a heartbreak that the Bible, the only fully trustworthy truth in the world, has been fully ostracized from being our nation’s leadership barometer for decision making.

Our nation is now like a ship without a rudder as we shun the Bible and place our hope in man’s wisdom. As Believers, it’s tough to watch the godless decisions being made daily. We know God’s truth will ultimately win out on this planet. But trying to live according to the Bible will get increasingly messy in the meantime.

How We Got Here

Our fall from being unquestionably the number one nation in the world is now spiraling downward at a dizzying pace. Having peaked as the “military hammer” (Jer. 50:23) of the earth at the end of WW1, Satan set his sights on marginalizing the United States’ Christian influence in the world.

Satan is a master deceiver. Although most of the world thinks of Satan dressed in red and carrying a pitchfork, he actually is presently the god of this world.

[Satan] the god of this world has blinded the minds of the unbelieving so that they might not see the light of the gospel of the glory of Christ, who is the image of God. 2Cor. 4:4

Satan is the opposite of God’s love and truth. Misery and chaos are his trade-marks and he hates freedom almost as much as he hates Born Again Believers.

Capitalism, which is the economic source of freedom, is rooted in Biblical verse. The Bible says work hard and trust the Lord to provide. With obvious exceptions, if you don’t work, you don’t eat.

The opposite of capitalism is godless communism. It can be foisted only on an uneducated and Biblically illiterate populace, so the education system was Satan’s first target.

Our educated population stood alone in the world as we put a man on the moon before computers. The middle class was strong and God’s Word was read daily in school. 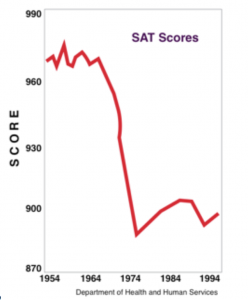 But in 1962-63, through three liberal and godless decisions, the Supreme Court decided it was unconstitutional to have God’s Word be a part of public schools. Satan used the liberal Supreme Court and the nation’s relativity new compulsory public education system to throw God out of the classroom. Thus began the downward spiral of the greatest nation on earth.

Much has been written about 1962 being the turning point in America’s decline. You can easily trace the breakdown of marriage, out-of-wedlock births, increase in illegal drug use and increase in crime to around 1962 or shortly thereafter. 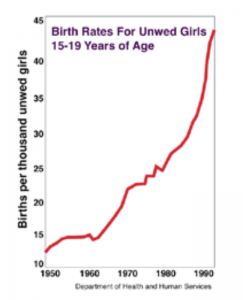 There’s a heavy penalty to pay for telling God we don’t want and/or need Him. As a nation without a rudder, God’s Word is ignored. We now tax the uneducated poor and call it the lottery. We legally kill babies for convenience. We don’t discipline our kids hoping to build their self-esteem.

We abuse power in the name of politics. We allow despicable destructive pornography by calling it freedom of expression. We encourage welfare instead of work. What a mess.

As a result, Believers are peddling backward, having to defend following and standing on Biblical principles in an ever-increasingly hostile environment.We have to face the facts that our constitutional right to live our lives based on scriptural principles is eroding daily. 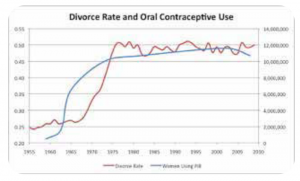 Whether we admit it or not, Christianity is not only being wiped out in other countries, but also right here in America. If the Lord tarries, it won’t be long before Believers have zero rights in the United States to openly praise and worship Jesus Christ.

Some think this is the Christian’s cue to run to the mountain tops, hide in radar-deflecting tents and eat roots for food. But this is no time to back down! Rather, it’s time to proclaim God’s truth at every opportunity, being sensitive to God’s leading.

The Bible tells us where all this ends. And as the world slides into the messy mire of lies and deceit, we have the only truth—the Bible and the Good News of Jesus Christ’s atoning blood. So as we near our exit, and it gets messy in the meantime, we have hope God will use us to reach those who do not know Truth. Nothing is more important.

Hey, this is what we’ve been training for all our spiritual lives... it’s time to put into practice Biblical truth and share what we know at every opportunity. So pray for wisdom and boldly run the race.