Buried in the short book of Habakkuk is a most interesting prophecy.

God comes from Teman, And the Holy One from Mount Paran. His splendor covers the heavens, and the earth is full of His praise. Hab.3:3

This prophecy continues with references to the Messiah’s (2nd) Coming just after all the earth’s mountains collapse—a clear reference to the Day of the Lord, the 70th Week of Daniel, the Time of Jacob's Trouble, the 7 years of Tribulation.

What’s fascinating is the reference to God coming from “Teman.” Teman was the capital of Edom, which is today in the southwest part of Jordan. "Seir" refers to a mountainous area in southwest Edom. What’s that about? Why is God coming from Edom?

The next line in the verse has the “Holy One” from Mount Paran, a reference to the place where God moved to from Mt. Sinai and the Israelites could see His glory from a distance.

He said, “The LORD came from Sinai and dawned on them from Seir; He shone forth from Mount Paran,… Deut. 33:2

So Habakkuk recorded a God-inspired vision of the last days regarding the Lord arriving after the Tribulation to defeat Satan and set up His kingdom for 1000 years of peace—what we call the Millennial Reign of Christ. 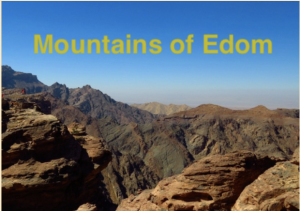 But why is the Lord coming from Edom and the mountains of Seir? What’s that all about?

Isaiah sheds a little light on this:

Who is this who comes from Edom, with garments of glowing colors from Bozrah, this One who is majestic in His apparel, marching in the greatness of His strength?… Is. 63:1a

Isaiah, like Habakkuk, says at the end of the Tribulation God comes from Edom—but more specifically from “Bozrah.”

The last clue we’re given is the meaning of the word “Teman” in Habakkuk 3:3: It means “South, as being on the right hand of a person facing east.”

So if you face Edom from Israel looking east, on the right side or south of Edom is Bozrah and the mountains of Seir. And guess what is located in the middle of those mountains—the empty city today known as Petra, Jordan.

Petra, of course, means “rock” and is located in the rugged mountains southeast of the Dead Sea and near Israel’s eastern border.

Petra was the capital city of the Nabateans. This nation seems to have come out of thin air, living for a couple hundred years around the time of Christ on the earth. Then, just as mysteriously, they disappear with no trace of what happened or where they went. 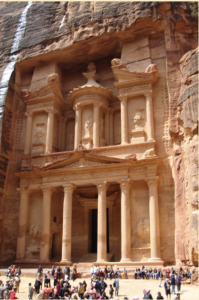 The Nabateans were known for their carvings into sandstone. The area where Petra was/is located is full of sandstone mountains. They would artistically begin carving straight into the soft rock in the high sandstone walls.

Today you can see houses that had several rooms carved deep into the sandstone walls. They even carved graves, tombs, water channels and mangers into these walls.

After carving all this for 200+ years, it left the area today dotted with thousands of caves. It’s been estimated that when fully excavated, the city could hold up to 5 million people. 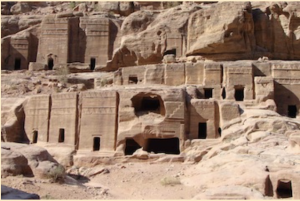 So let’s tie all this together…

Matthew 24 and Mark 13 describe an event at the middle of the 7 years of Tribulation when the Jews must flee for their lives.

They are warned that when they see the “abomination of desolation” standing in their Temple, that’s the sign to run or be killed.

Apparently, based on Zech. 13:8-9, two-thirds of the Jews will be killed on that terrible day as they flee the city from the hand of the Antichrist.

But one-third do make it out of Jerusalem alive and flee to the “mountains” where they will spend 3 1/2 years protected from the Antichrist.

Much like God provided water and food to the Israelites who wandered in the desert for 40 years after the Egyptian Exodus, God will similarly provide for the surviving Jews who heeded Biblical warnings to flee when they saw the Abomination of Desolation.

Isaiah again fills in some details about the area to which they fled:

Men will go into caves of the rocks and into holes of the ground… Is. 2:19

In order to go into the caverns of the rocks and the clefts of the cliffs… Is. 2:21

This further confirms that the holes, caves and large caverns that we see today in Petra are where the Jews end up living for the last 3 1/2 years of the Tribulation, protected and provided for by God.

It’s during this time when they have come with nothing but the clothes on their backs, that they lose their pride, repent, and begin understanding their Biblical roots.

At the end of the Tribulation, the Antichrist brings the armies of the world to GATHER in the Valley of Armageddon in order to march against the Jews in Petra, to wipe out the rest of Israel. It's the last act of a desperate Satanic force.

With the armies of the world marching south from Jerusalem, the coming doom is easily seen by the Jews high in the mountains of Petra. So Israel cries out to their Lord like never before.

It’s at that time that the Lord returns to the Jews and reveals Himself.

“I will pour out on the house of David and on the inhabitants of Jerusalem, the Spirit of grace and of supplication, so that they will look on Me whom they have pierced; and they will mourn for Him, as one mourns for an only son, and they will weep bitterly over Him like the bitter weeping over a firstborn.” Zech. 12:10

It will be both a sad and joyful day for the Jews holed up in Petra. They will be absolutely brokenhearted to learn that Jesus came as their Messiah and they crucified Him.

But it will be joyous as Jesus then goes from Petra/Bozrah/Edom to wipe out the oncoming armies of Satan with the breath of His mouth (2Thes.2:8).

As you watch/read/listen to these links below, keep in mind that none of what's going on in the world makes any sense unless you look at it from a Biblical perspective— understanding that Satan is the god of this world and he's chomping at the bit to take over once the Restrainer is removed. CQLJ

EXCELLENT VIDEO!!!!!!! Clear, concise, professional—everything you need to know—if someone watches this video, they won't get the va[[ine!

If You've Already Had Covid, DON'T Get the Va[[ine!!
Article

You can't improve on God's immunity system in your body, and trying may disable or kill you!

Your Brain Connected to Internet?

Brain-machine interface is coming faster than you think. This video shows how close we are to Rev. 13:15-16

Keeping kids in masks and out of the classroom for more than a year was totally unnecessary, if not cruel.

Why is our government selling va[[ines for Big Pharma?

Why do all kind of shortages keep getting worse? Because the government is paying farmers not to plant.

This is a fascinating inside view of what went on during Trumps Presidency. God dropped a good guy right in the middle of Satan's playground!

10 questions to see what you know about COVID. At the end, it shows you any wrong answers and why they were wrong. (I made 7 of 10 😠 BP)

Women worldwide are horrified at the number of miscarriages, stillbirths and insanely painful periods.

A blogger, using the handle DC_draino, asked his audience if anyone had heard about this happening and received over 2000 heart-breaking replies! Below are screen shots of just a few of the 2000+ replies he received. What is being covered up makes me physically sick! WARNING: SOME OF THIS IS QUITE GRAPHIC! 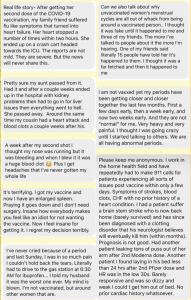 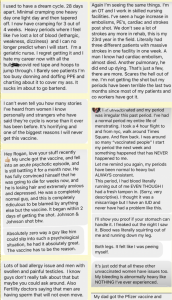 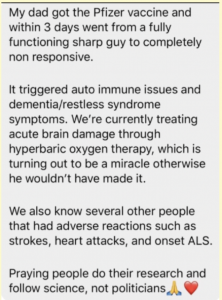 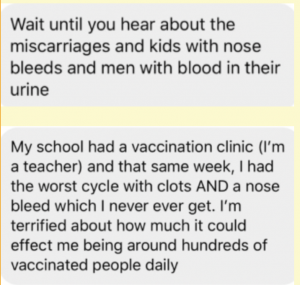