As we move into full-blown communism in America, our freedoms are blatantly being stripped awayl

You can see big tech's movements over the last few months escalating their censorship. Conservative and Christian posts and even complete social accounts are "fact-checked" or deleted.

The influence these tech giants have is enormous.(5) So they simply suppress information, helping to shape a narrative that does not represent the full picture of what’s going on.

Conservative and/or Christian videos just disappear...deemed inaccurate when they are not.

But do realize our thoughts and actions are also being manipulated. For instance, there seems to be a lot of advertising that use homosexuals as leads. I have a problem with the sin of homosexuality because God says that life-style is abhorrent to Him.

You shall not lie with a male as one lies with a female; it is an abomination. Lev. 18:22 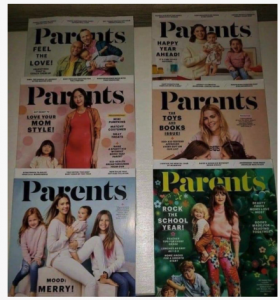 In the picture above, notice that there is an absence of heterosexual males in all those "parents." And have you noticed there has not been a TV show in over 20 years that has a strong male leading his family like "Father Knows Best."

Several movie actors have come out lately saying they are being black-listed for being conservative and/or Christian.(2)

Even Hallmark Channel has been pressured to produce homosexual relationships in a positive light. 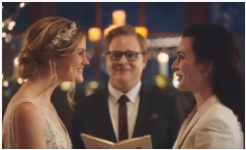 They aired one movie in November and received 60,000 complaints and One Million Moms(1) called for boycott of the channel. But Hallmark was undeterred and plans to continue to insert homosexual scenes.

Or do you not know that the unrighteous will not inherit the kingdom of God? Do not be deceived; neither fornicators, nor idolaters, nor adulterers, nor effeminate, nor homosexuals, nor thieves, nor the covetous, nor drunkards, nor revilers, nor swindlers, will inherit the kingdom of God. Such were some of you; but you were washed, but you were sanctified, but you were justified in the name of the Lord Jesus Christ and in the Spirit of our God. 1Cor. 6:9-11

Satan is coming at Believers with both barrels blazing. The House of Representatives is now holding hearings to take Fox, Newsmax and OANN off cable because of "disinformation disseminated" in the last election cycle.(3)

There is another bill in Congress that strips away the ability to live as a Believer without risking jail. Called the Equality Act, it "Protects" LGBT people but in doing so takes away Christian's rights to make decisions based on the Bible.(4) 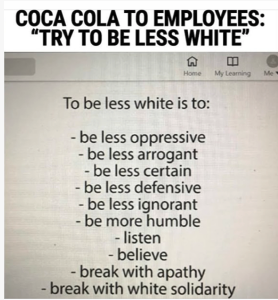 The same is being promoted in business. Consider this Coca Cola memo. They are being pressured to change the way their employees think about themselves. Really?

Those wanting to take control of the world don't want God's voice to be heard in opposition of Satan's voice.

We are simply losing, or have lost, our freedom of speech. There will come a day when only state-run networks will spin the Globalist version of truth.

So it's an all-out hostile assault against Biblical values from the media, government and social networks to desensitize the world to horrible sin.

And we know where all this trash is coming from—and it's certainly not flesh and blood!

...choose for yourselves today whom you will serve: Josh 24:15