FacebookTweetPinEmail
It’s hard to believe this is actually a debate!

When spending $5 billion saves $180 billion per year in illegal alien expenditures, what nut-case can’t see the common sense of building a border wall to stop the monetary bleeding? Not to mention heavily reducing the problems with incoming drugs, murders, gangs, etc.

We ARE a compassionate nation that welcomes all LEGAL immigrants. But 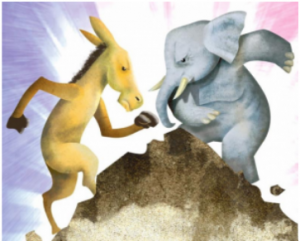 to remain a nation, we have to have order. We have to control who is and who is not allowed to come live here.

Our current border problem began when our public schools were high-jacked by the liberals in the '70s. Since then our colleges have been graduating some real indoctrinated doozies.

And now these same doozies are voting some highly unqualified people into public office … e.g., Rashida Tlaib, the Muslim who called President Trump a mother-xxxx in public, and Alexandria Ocasio-Cortez, the newly elected congresswoman who inexplicably named the three branches of government as the House, Senate and Presidency.

Defined borders are big in the Bible.

“Do not move the ancient boundary which your fathers have set.” Prov. 22:28

After God allowed Assyria to punish Jerusalem, she became prideful and He later broke down her borders as punishment.

“So it will be that when the Lord has completed all His work on Mount Zion and on Jerusalem, He will say 'I will punish the fruit of the arrogant heart of the king of Assyria and the pomp of his haughtiness'” Is. 10:12

It is God Who determines a nation's borders …

“…and He made from one man every nation of mankind to live on all the face of the earth, having determined their appointed times and the boundaries of their habitation,” Acts 17:26

And do realize, when you start messing with borders, you’re actually messing with God. Good luck with that. Even though Great Britain was the undisputed leader of the world in WWI and God used her to raise up the State of Israel in her ancient homeland, the Brit's world dominance quickly diminished after she carved up Israel’s boundaries giving 70% of her designated land to the Palestinians (today called Jordan). 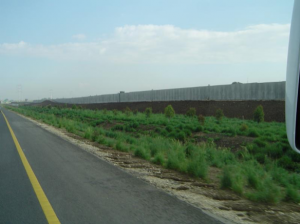 Israel built a simple wall of separation that immediately solved their problem.

There are over 250 references to walls in the Bible, mostly referring to protection. Israel apparently noticed this because in the 1990s there was a problem with people entering neighborhoods with intent to harm.

But once Israel built a wall to protect her citizens, the problem literally went away overnight. See photos (above) of the simple wall Israel built.

Jericho was famous for being a walled city. The wall was so strong it seemed impenetrable. But in the Book of Joshua, we see the Lord break down the walls to allow Israel to defeat the inhabitants of Jericho.

When Nebuchadnezzar defeated Jerusalem in 586 BC by building a siege wall around Jerusalem and for two years starving the city into extinction, the crowning blow of embarrassment was to tear down the city’s walls of defense.

“He burned the house of the LORD, the king’s house, and all the houses of Jerusalem; even every great house he burned with fire. So all the army of the Chaldeans who were with the captain of the guard broke down the walls around Jerusalem.” 2Kings 25:9-10

Seventy years later, in the Book of Nehemiah we find Israel in Babylonian captivity due to disobedience of not adhering to God’s commands. Then they were allowed to return to Jerusalem but her WALLS and GATES had been destroyed, leaving the newly returning inhabitants defenseless.

So what was the first thing Nehemiah did? He didn’t start by holding a 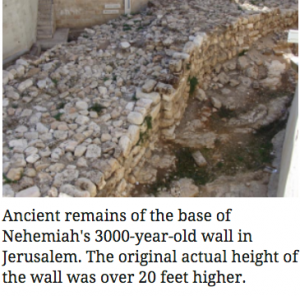 spiritual revival. He began by doing the most practical thing possible, rebuilding Jerusalem’s walls and gates to make the city safe.

Nehemiah knew that a city without solid border walls and gates made spiritual revival senseless. Walls had to be built first. Only after the walls and gates were rebuilt for safety was Israel able to rebuild the rest of the country.

Even in the Book of Revelation, in the New Heaven and Earth where there is no death, mourning, crying or pain, we see God still uses walls and gates for the New Jerusalem.

God says He is the One who determines a nation’s leadership!

“It is He who changes the times and the epochs; He removes kings and establishes kings;” Dan. 2:21

“…there is no authority except from God, and those which exist are established by God.” Rom. 13:1b

All of our presidents, from George Washington to Donald Trump, have been ordained by God and He is in control. If you don’t like who your leader is, take it up with God—as many of us did with some of our past presidents!

At a time like this, it’s also important to remember to pray for our leaders. That WILL make a huge difference.

“First of all, then, I urge that entreaties and prayers, petitions and thanksgivings, be made on behalf of all men, for kings and all who are in authority, so that we may lead a tranquil and quiet life in all godliness and dignity.” 1Tim. 2:1-2

I know many, many people who pray daily for our nation's leadership. If you don't have them on your prayer list, add them!! This has never been as important as it is now!

So, to recap, God is pro-wall. He’s in control of all world leaders, whether they realize it or not. And our current leaders need all the prayer he can get to know how to defend this nation’s freedoms so graciously given to us.