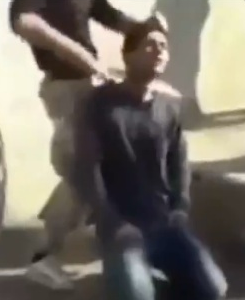 What most Americans think is impossible in America is actually very possible.

It's very difficult for Americans to grasp what's going on in the Middle East. What we see on television, even on Fox News, is at best just touching the fringe of the real problem.

And even on conservative talk radio or conservative Internet websites, rarely does anyone seem get to the heart of the problem... at that is this: 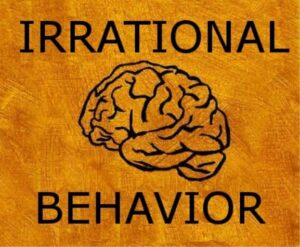 God warned Abraham and the future world about their irrationality in this description of Ishmael.

That fits the classic definition of being "irrational."

The Arabs come from Ishmael, whose birth was a result of the sinful relationship between Abraham and his maid Hagar.

Rather than trusting God at His word that Sarah would have a child at the age of 90, they decided to "help God" by taking matters into their own hands. 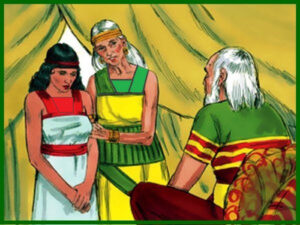 "Now Sarai, Abram's wife had borne him no children, and she had an Egyptian maid whose name was Hagar. So Sarai said to Abram, 'Now behold, the LORD has prevented me from bearing children. Please go in to my maid; perhaps I will obtain children through her.' And Abram listened to the voice of Sarai." Gen 16:1,2

Much like Adam listened to Eve and ate the forbidden fruit, Abraham took his wife's well-intentioned advice. The result is the irrational Arabs. And we would do well to understand God's warning of them being irrational. To fail to understand this point could cost many lives. 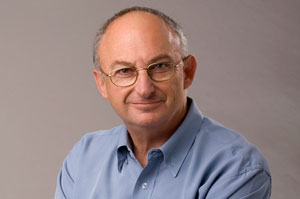 An Arab woman was severely burned by her family due to suspected adultery. Israel took the woman into their hospital in Beersheva and successfully treated her burns by supplying all the needed medically advanced Homograph skin treatments at no cost.

The Arab woman returned several times to Israel for followup visits crossing the border at Gaza. On her final visit to the doctors who saved her life, she was caught at the border wearing a suicide bomb belt.

She was coming to the hospital to explode herself and kill the doctors and staff who helped her. Why? Because her family promised to forgive her if she killed some Jews. Irrational? Yes. 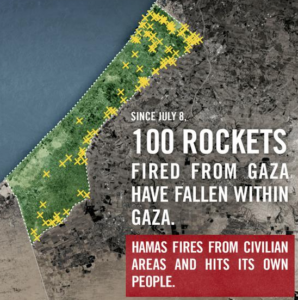 Trying to find a way to give jobs to the Muslins in Gaza, an enterprising Israeli built a factory literally on the Israel/Gaza border. Those in Gaza could work at the
Jewish factory on the Gaza side and make good money but didn't have to cross the border each day. The work was done on the Gaza side of the border and the finished goods came out on the Israeli side.

Sounds like a good idea. But guess what happened... the Arabs kept blowing up the factory with suicide bombers so they had to close. Irrational? Yes.

Another "irrational" example:
During the current Israel-Gaza conflict, Israel captured an Arab manual on urban warfare that described why they put the "public" at risk by launching rockets from neighborhoods, schools and mosques.

To quote from their manual, "the destruction of civilian homes increases the hatred of the citizens toward the attackers." So they use the purposeful death of their own women and children so Israel will be blamed. Irrational? Yes.

The following photos were released by Israel to show from where the rockets are being launched. 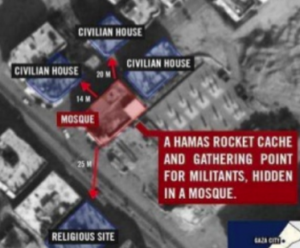 Rockets launched from mosque and houses 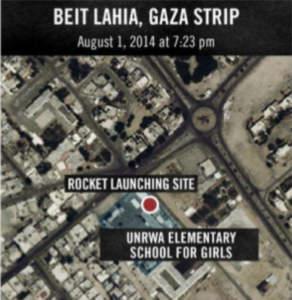 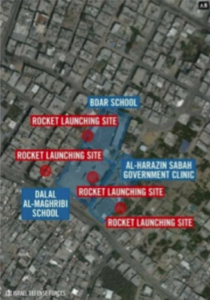 Rockets launched from clinic and schools

Israel released scores of pictures like these to prove the Arabs in Gaza are following their war manual verse-by-verse!

Another "irrational" example:
Israel was forced by the U.S. to withdraw from Gaza in 2004. Gaza held elections and guess who they elected to run their state? The terrorist organization Hamas. Irrational? Yes.

Lastly, the height of irrational thinking...
The Muslims promise uneducated youth with no hope that if they die while killing Jews they go straight to heaven and will have 70 virgins waiting for them. They actually believe this! Most of the Muslim men found after blowing themselves up have their privates heavily wrapped to shield from the blast. Irrational? Yes.

How do you deal with millions of irrational people? Israel knows. She is surrounded by them. They have learned the hard way that you certainly can't trust them. Arabs ONLY understand force. They will make peace only in order to regroup and try again.

ALL children are taught to hate Israel and America from an early age--in Arab public schools! 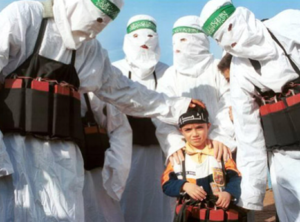 While supposedly in "Peace Talks" focused on ending the years-long hostility, they were building an underground  tunnel network that boggles the imagination. Some are large enough to have cars driven through them. 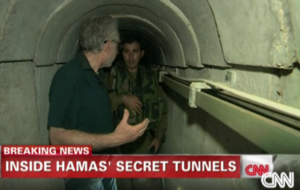 While searching the massive tunnels, Israel discovered Hamas was preparing for a HUGE offensive to begin on September 24, the beginning of the Jewish New Year.

The Gazan tunnels were built with money from the U.N. (dollars from the United States). The monetary aid was supposed to be used for humanitarian purposes. But they not only used it to build these tunnels and stock them with missiles, they also stocked them with handcuffs, syringes, ropes and tranquilizers.

According to captured Hamas fighters, these items were for dealing with captured Israelis. They expected to be able to use the tunnel system to sneak into Israel and capture hundreds of Israeli women and children.

And don't think for a moment that the Muslims aren't planning more attacks on America.

We've been able to detect and thwart a lot of Muslim attempts at U.S. carnage, but since 9-11, there have been 37 Muslim acts of terrorism in this country involving 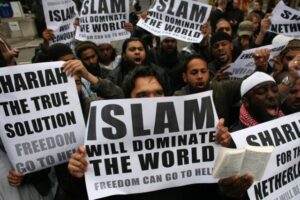 killing 62 people. These numbers were calculated using the "hate-crime" definition. All were absolutely "irrational" and only 9 were Muslim on Muslim murders.

Are you aware of the fact that there have been 28 documented acts of terrorism by Muslims against Christians, Jews and others inside the United States?!

You have heard all about Michael Brown and Trayvon Little, who died without any credible evidence that they were innocent bystanders. But hardly a whimper regarding Muslim violence on Americans.

The FBI has stopped many more attempts, but we as a nation are virtually powerless against sleepers like Nidal Hasan who killed 13 and wounded 22 people at Fort Hood in 2009. 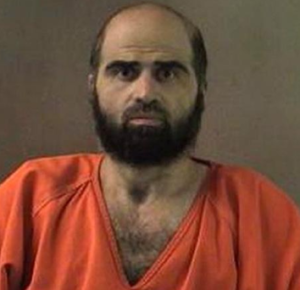 In a letter Hansan wrote to the Killeen Daily Herald he said of the attack, "I was defending my religion." This is consistent with the reports of him screaming "Allahu akbar" ("God is great") as he mowed down innocent and defenseless people.

And now we've been letting tens of thousands of people walk into the United States illegally through the Mexican border, many of whom are from the Middle East.

And why in the world are the signs that our government has erected along the Mexican border at the water stations are in Spanish, English, Chinese AND ARABIC! 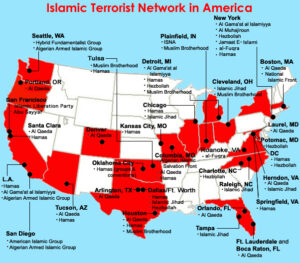 Breitbart News recently reported that six individuals from Afghanistan, Irag and Yemen were recently stopped by U.S. Border Patrol in Texas, each with over $3 million in cash in their personal possession. That's six Muslim men with almost 20 million dollars cash, sneaking into the U.S. And don't think they're the only ones.

Reuters is reporting that telephone conversations with Islamic State fighters have revealed that they have plans to attack inside the U.S. using some of the sleeper cells here. In one conversation the Muslims said,

"The West are idiots and fools. They think we are waiting for them to give us visas to go and attack them, or that we will attack in our beards and Islamic clothing. They think they can distinguish us these days--but they are fools, and, more than that, they don't know we can play their game in intelligence. We have penetrated them with those who look like them.... we will send our bombs.

Our land will not be attacked while their land is safe."

It is interesting to note that the voice on the video of the recent beheadings of both U.S. journalists James Foley and Steven Sotloff had a British accent.

So we MUST understand what we're dealing with, people who want us either dead or worshiping Allah. They are Satan's minions, savages who think they are fighting for God. They lie, cheat, steal and murder. Never trust one. Even those who claim to be peaceful.

And don't fall for the "Oh those are just some Muslim extremists." Estimates of the number of "extremists," defined as those who actually follow the Muslim religion verse by verse, range from a low of 7% to a high of 30%.

Following the Koran means you believe God calls for you to kill non-Muslims. Worship Allah or die. 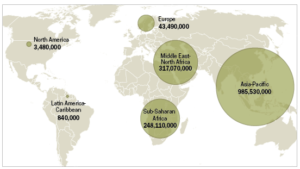 These "Extremists" believe they will be rewarded if they kill a non-Muslim American. They have little else to live for, most existing in the dregs of poverty. These are the same "extremists" who send their children into Israel loaded with bombs to kill innocent men, women and children in malls, at weddings and in public places.

Let's hope and pray our government comes to understand this truth before it's too late. And this, of course, assumes they don't already have inside control.

Of course, we know the Lord is in total control. Everything that we see happening is allowed by God for His purposes. And He says to keep our eyes, not on this earth,

but rather on heaven. Even more so as our glorious exit approaches.

For video presentations on the topic of Islam:
Click Here (for The True Goal of Islam and Shari'ah Law in the U.S.)
or Click Here (for What They're Not Telling You About Islam)