Article: Will Germany & Syria Sleep Together?

Traditionally it has been taught that the 10 Kings of Daniel and Revelation will be 10 nations from the European Union-- but the Bible says differently!
The Bible states clearly that in the latter days there will be ten kings--dead in the center of the events in the 70th Week of Daniel.

"And the ten horns which you saw are ten kings, who have not yet received a kingdom, but they receive authority as kings with the beast for one hour."  Rev. 17:12

These ten kings first show up in the image of the beast in Daniel 2. A typical, and accurate, description by Biblically sound Bible prophecy teachers usually looks something like this: 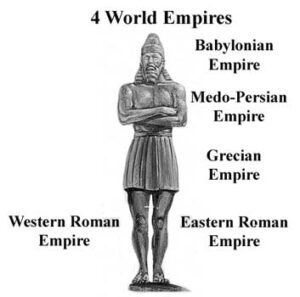 Daniel 2's image is a Gentile time-line of the entire future of man on earth. It accurately predicts the four major kingdoms that will rule the world  from the time the prophecy was given until until Christ sets up his Millennial Kingdom on earth.

The Daniel 2 prophecy was so specific and accurate, covering thousands of years, that Bible critics claimed it must have been written "after the fact." Fortunately, the O.T. was translated into Greek in 250 BC, along with Daniel's prophecies.

Rome eventually split and had two capitals-- Rome (West) and Constantinople (East). This division is represented by the two legs in Daniel's image. 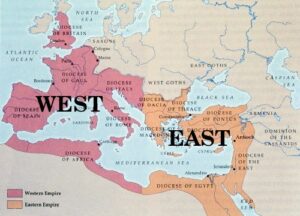 As you can see in the map above, the Roman area ruled by Rome in the west was an area quite distinct from the Roman area ruled by Constantinople in the east.
The toes in Daniel's image represent the same Ten Kings of Daniel 7 and Rev 17. They are the Kings who will come together, post-Rapture, and make a peace treaty with Israel for seven years (Daniel 9:24-27).

But one important factor has been overlooked by almost everyone teaching these verses. There are only five toes coming out of the European side of the statue, not 10. The other five toes come from the eastern leg, the Arabs. 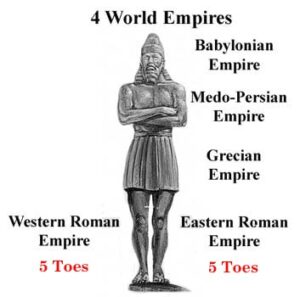 This explains why the Bible says the two groups are completely different and won't adhere to each other.

"And as the toes of the feet were partly of iron and partly of clay, so some of the kingdom will be strong and part of it will be brittle. And in that you saw the iron mixed with common clay, they will combine with one another in the seed of men; but they will not adhere to one another, even as iron does not combine with pottery." Dan 2:42-43

The Europeans and the Arabs will be forced into an uncomfortable and quite shaky seven year agreement. This alliance is brought about by the reemergence of Israel as a powerhouse in the post-Rapture chaos.

At that time Israel will have begun wiping out the nations around her  with her powerful army.

"In that day I will make the clans of Judah like a firepot among pieces of wood and a flaming torch among sheaves, so they will consume on the right hand and on the left all the surrounding peoples, while the inhabitants of Jerusalem again dwell on their own sites in Jerusalem." Zech. 12:6

With the Arabs screaming, and Israel having the upper hand, the 10 unequally yoked European and Arab nations will agree to protect Israel... if she will just stop her carnage! Israel agrees to peace from a position of strength!

So who are these 10 nations? Five from Daniel's western leg could be (for example):
1) Germany
2) France
3) Italy
4) Spain
5) England or Portugal

Iran will have been wiped out by the Russian/ Iranian invasion--that takes place just after Rapture (Ezek 38 & 39). But who actually ends up in the two groups of five is not 100% clear in scripture...other than the area from which they they come-- Europe or the Middle East.

And don't forget that half-way through the 7 year peace agreement the World Leader's peace treaty is broken and the Jews experience the worst Jewish massacre in all of  history (Dan 9:27; Mat 24:21).

"for then there will be a great tribulation, such as has not occurred since the beginning of the world until now, nor ever shall." Matt. 24:21

And never forget that the Bible says ALL of the end-time nations that come against Israel are  Muslim! Sorta nails down who the enemy is!