Article: Why "The SHACK" Is Blasphemous

Why "The SHACK" Is Blasphemous 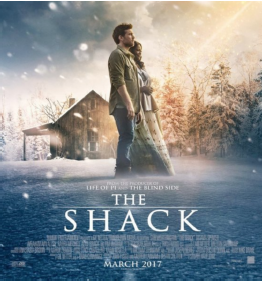 The Shack is a well-written "Christian fiction" book by William P. Young that has sold over 20 million copies since its debut in 2007.

Due to the intense story, for most readers it causes a flood of emotions to well up inside, masking the theological errors throughout the book.

We didn't recommend reading the book when we reviewed it it 2008 (1), nor do we recommend seeing the movie that is coming out in March. Here's why:

Although The Shack is a fiction book, it attempts to address significant theological issues. But the answers given to these issues are in grave Biblical error. And more often than not, these errors go undetected by most Christians. Here are some of them...

The Shack presents an unbiblical picture of God: God the Father is personified by a large black lady named Papa.

I could stop there, as most Believers see the blasphemous problems with making God into a woman-which basically is goddess worship. But there's much more.

The Bible never teaches that God the Father takes on a physical form. Just the opposite.

"God is spirit, and those who worship Him must worship in spirit and truth." John 4:24

"...who alone possesses immortality and dwells in unapproachable light, whom no man has seen or can see." 1Tim. 6:16

Even though God the Father is shown to possess both male and female attributes, the Bible always refers to God in the masculine gender, never female.

On page 95, "Papa" has scars in her hands. But, of course, only Christ bore the sins of the world. God the Father rendered judgment to His Son.

The Shack presents an unbiblical picture of Jesus: Jesus of The Shack is not Jesus of the Bible!

There are several verses in the Bible where Jesus exercised His headship, His divine attributes. But on pages 99-100 it says, "Jesus as a human being had no power within himself to heal anyone." And this is, of course, 100% false. Jesus was 100% God and 100% man.

The Shack says on page 122-124 that the Trinity is all equal, that they don't relate to each other within a hierarchy. But the Bible says clearly that God sent His Son. The Son did not send Himself. So while the members of the Trinity are all equal, there is also a divine order of headship and submission, which is hierarchy.

"No one can come to Me unless the Father who sent Me draws him; John 6:44

The Shack presents an unbiblical picture of salvation: The Shack suggests there is more than one way to be saved. Basically, it teaches pluralism. The book states on page 182, with regards to salvation:

"Those who love me come from every system that exists. They are Buddhists or Mormons... Muslims,"

While it IS possible that a Mormon or Muslim could get saved, they wouldn't stay in the Mormon or Muslim faith. But The Shack suggests that those in the faith are indistinguishable ... no difference. Even adding:

"I have no desire to make them Christian."

And then it goes on to say:

"Does that mean all roads will lead to you?"

To which Jesus says:

Of course, the Jesus of the Bible disagrees:

"Enter through the narrow gate; for the gate is wide and the way is broad that leads to destruction, and there are many who enter through it." Matt. 7:13

Yet The Shack doesn't tell people they should seek the only way to avoid eternal damnation--believing Jesus was God, came to earth, lived a sinless life, was crucified, and defeated death by rising from the dead.

"...until we all attain to the unity of the faith, and of the knowledge of the Son of God, to a mature man, to the measure of the stature which belongs to the fullness of Christ." Eph. 4:13

The Shack embraces Pantheism: Pantheism is the false teaching that God is everything and everything is God. Trees, rocks, animals, the sun, pets, people...are all gods. But even though God may live in a person or be present in a rock, that doesn't mean He is a person or a rock.

Don't confuse this with God being "omnipresent." God is not immersed in the fabric of everything, God is present in all time and space. Noted New Ager Benjamin Creme wrote in his book, "The Reappearance of the Christ and the Masters of Wisdom":

The Shack also teaches the New Age principle that "God is in everything."

This is the same garbage that Rick Warren teaches in his blasphemous "The Purpose Driven Life":

"He rules everything and is everywhere and is in everything." p. 88

If pantheism were true, it would not be a sin to worship the sun, moon or stars because they would, in fact, be God. But the Bible forbids it.

"And beware not to lift up your eyes to heaven and see the sun and the moon and the stars, all the host of heaven, and be drawn away and worship them and serve them..." Deut. 4:19

Funny thing, when you think about it. The same lie Satan used in the Garden of Eden, "You can be God," is still being used by Satan today!

Conclusion While a mature Believer may be able to read the fiction book and/or watch the fiction movie without being compromised, we believe that the dangerous theological errors in The Shack are from the pit of hell.

Reading and/or seeing The Shack movie by a mature Believer could expose less mature Believers to major Biblical error. What could have been an interesting story is actually playing with fire (i.e. Satan), which is never acceptable.

"Be of sober spirit, be on the alert. Your adversary, the devil, prowls around like a roaring lion, seeking someone to devour." 1Pet. 5:8