Article: Was Jesus Crucified on Friday? 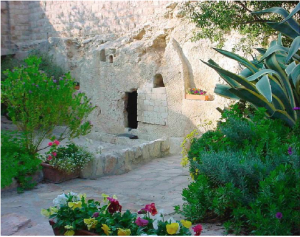 Most of the Christian world observes Jesus' death on the Friday before Resurrection Sunday.

But according to the Bible, that dog won't hunt!

Most churches today teach that Friday is the day of Jesus' death on the cross. This is an alternate view. (I actually think I'm Biblically correct but my wife thought I needed to soften my stance. Naturally, I worry if I soften my stance, don't draw lines in the sand, I might turn into a democrat).

First, it must be noted that the Bible gives us a detailed description of every day of Jesus' last week prior to his crucifixion- VERY detailed. But there are only five days detailed in the Bible, instead of six. The missing day is referred to by Bible scholars as "The missing day." LOL! Not much imagination there. It takes a lot of (guts, pride, ego, take your pick) to say there might be something left out of the Bible narrative.

These Biblical "scholars" ASSUME that Jesus was crucified on Friday; therefore, there should be six days of details (Sunday through Friday). But only five are referenced in Scripture (Sunday through Thursday).

And, if you use the above timeline, it directly contradicts this verse:

Luke 16:19-31 is not a parable but rather an actual description of the bottomless pit. At death, those O.T Saints who trusted by faith the future Messiah were enjoying paradise just a few feet from those who were wailing in the scorching flames of Hades. They were so close they could actually talk to each other across a "chasm" (v. 24-26). 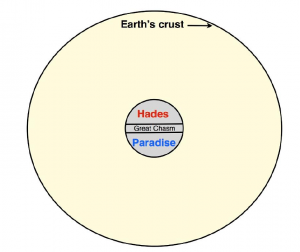 It's interesting that when Jesus died and defeated death, the first thing He did was go to the Bottomless Pit to claim and release His O.T. Saints so they could go to heaven.

"(Now this expression, 'He ascended,' what does it mean except that He also had descended into the lower parts of the earth? He who descended is Himself also He who ascended far above all the heavens" Eph. 4:9-10

80,000 people at a football game can make a lot of noise, but that's nothing compared to cheer that must have roared when Jesus made His appearance in Paradise to redeem the O.T. Saints. I'm hoping I get to see a replay of that one day!

Apparently, as the redeemed Saints crossed through the earth's crust on their way up, some lingered around and were seen by those alive on the earth.

And behold, the veil of the temple was torn in two from top to bottom, and the earth shook; and the rocks were split, and the tombs were opened; and many bodies of the saints who had fallen asleep were raised; and coming out of the tombs after His resurrection they entered the holy city and appeared to many. Matt 27:51-53

I'm sure at least one conversation back then went something like this:

Eli: "Wow, Aaron, I thought you were dead! I went to your funeral two years ago. You look great!"

Aaron: "Nope, not dead. I just changed places from earth to Paradise. I had to wait until the Messiah came to the earth and shed His blood for me so I could go to heaven. I'm on my way to heaven, just stopped for a moment to reminisce."

Eli: "Then if you're on your way to heaven, did the Messiah come, did I miss Him?"

Aaron: "Did you not hear that Jesus of Nazareth was crucified three days ago?"

Aaron: "Yep, and you can only get to heaven by faith in that fact."

Eli: "Wow! Hey, what's with the all those white clothes you're wearing?"

Aaron: "You get them on arrival after you die. If you were trusting the Messiah to pay for your sins and you die, you get the clothes."

Eli: "That's it? That's all you have to do- TRUST? Your clothes aren't received based on doing good works?

Aaron: "Come on Eli, are you so foolish that you think that there is anything you do can add to the finished work of the Messiah? I gotta go now."

(Note: Eli and his family received the Holy Spirit 47 days later at the Feast of Pentecost)

(Hope you enjoyed that little tangent ... sorry, I got side-tracked... now back to the study on what day Jesus was crucified)

So, if you ASSUME the Bible records all the events without a "missing day," using a literal translation and application of the Biblical text, you have a much more scripturally defendable timeline:

By not arbitrarily inserting the "missing day" you also solve the problem of Jesus being "three days and nights in the heart of the earth."

Anyway I slice it, I can only get two nights between Friday and Sunday, even if I use a Jewish day beginning at sundown (sundown to sundown equals one day).

It seems so much simpler just to follow the text as written and you have literally three days and three nights, as the scripture says. Now consider the verse regarding Jesus arriving at Lazarus' house.

"Jesus, therefore, six days before the Passover, came to Bethany where Lazarus was, whom Jesus had raised from the dead." John 12:1

We know that the latest Jesus could have arrived at Lazarus' house would have been Friday before His Palm Sunday entry, because Saturday was Shabbat and He couldn't travel. If you count six days from Friday, you come to Thursday, and the verse indicates that Passover began then.

"The Jews therefore, because it was the day of preparation, so that the bodies should not remain on the cross on the Sabbath (for that Sabbath was a high day)" John 19:31

Then on the fourteenth day of the first month shall be the LORD'S Passover. Num 28:16 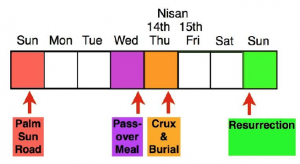 Passover lambs had to be slaughtered on the 14th of Nisan, which was Thursday that year. Jesus is called the Lamb of God (John 1:29). Jesus would not have been an acceptable sacrifice if He were sacrificed on any other day.

It seems so much simpler to me to just follow the text as written and you end up with literally three days and three nights--as the scripture states! But, of course, what's MOST important is not the day He died, but the fact that He defeated death and rose from the dead. On Sunday, three days and three nights after His crucifixion, He rose from the dead leaving an empty tomb. It gives me chills just thinking about the many times I've looked into that empty tomb in Jerusalem!