Our nation is spiritually adrift. Without a specific direction, who knows where we are headed. Someone once said, in effect, "If you don't have a goal, you're sure to reach it."

In the not-too-distant past, America's goal was to be governed by Biblical constraints. Our laws and constitution are full of Biblical references. Our schools taught Biblical principles.

But today we are but a flicker of our original flame. Amazingly, we have a viable contender for the Presidency, who if elected, may send us down the most dangerous path in our nation's history... a path where we formally depart from our scriptural foundation.
Our founding fathers would roll over in their graves if they knew that a member of major cult has a reasonable chance of being elected President of the United States.

Does this matter?
You better believe it does. It's one thing for a politician to claim to be a Christian, to line up inside Biblical boundaries, and act like a non-Christian. But it's a whole new animal to blatantly discard basic Christian principals and boldly line up with doctrines that qualify as a cult.

What is a cult?
A "cult" is a religious group or organization founded by, and built upon, the teachings of a religious leader that contradict or undermine major doctrines of the Bible. 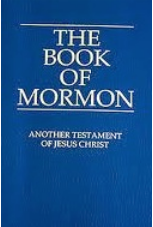 The Mormon doctrine (The Church of Jesus Christ of Latter Day Saints/LDS) is DIRECTLY OPPOSED to the Bible. Not even close! Not even in the ballpark. Despite Mormon's pro-family and clean-living image, here's why they are a cult:

There is also a third group, according to early Mormon doctrine, designating those that couldn't make up their mind to follow Jesus or Satan. Because of their indecision, God painted their faces black! Remarkably, this was taught up until 1978 when the modern-day Mormon prophet Spencer Kimball received a "divine revelation" that blacks were now ok to be Momons. Their original teaching on polygamy was "updated" in much the same way.

Mormons believe Jesus was the literal and PHYSICAL son of God, and that the "Father" sent Jesus to redeem the earth. Most Mormon pictures of God the Father and Jesus that I have seen show an old guy standing next to a younger man.

They teach that if you are a good Mormon, you too can, like Jesus, receive your own planet one day, populated by you and your wife (originally wives). They teach that a man can "call up" his wife, if she was good enough on this earth, to join him on their planet and have eternal celestial sex. I promise I'm not making this up!! 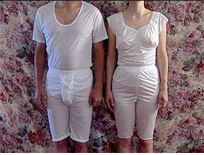 Somehow it is supposed to "promote modesty," but not sure how since it must always be covered up. But they mainly wear it for "spiritual protection." I could not find out how this is supposed to protect you spiritually.

Mormons receive this underwear in a special service at their Temple where they promise to wear it for the rest of their lives. You do get to decide what to choose: cotton, poly or nylon.

This spiritually protecting underwear must touch the skin so women must wear their bras on top of their underwear. LDS leaders say, "... wear the garments always, except for activities that don't permit it (such as swimming), and not to look for excuses to take them off."

Mormons believe you are saved by your good works. Only those who don't drink coffee, tea, alcohol (some of the big "keep you out of heaven" sins), and pay 10% of their gross income to the Mormon Church, go to heaven. The LDS church can check your income tax records for verification you are paying a full 10% to LDS.

These and other just as ridiculous stories in the Book of Mormon have been widely discredited.

Joseph Smith, founder of LDS, was literally killed for teaching this un-Biblical garbage in Illinois.

After Smith's death, Brigham Young led a group of Mormons to Salt Lake City where they could teach their heresy without getting killed.

When Compass takes groups to Israel, we find tons of archeological evidences of all the cities, towns, culture and money talked about in the Bible. Literally tons!

But not one trace of evidence has ever been found to validate the cities, culture and money written about in the Book of Mormon. It is a TOTAL and complete fraud.

There are many more doctrinal inconsistencies... too many to include in this short overview. But we have to realize we are not up against flesh and blood, but rather, Satan's lies. And this is one of his all-time best.

It's hard to believe that anyone would embrace this doctrine, especially in contrast to the truth found in God's Holy Word. If I didn't know how clever Satan was, I would think that Joseph Smith was two short of a coaster set.

Bottom line is whoever is part of the Mormon cult is tremendously deceived by Satan. Do we want someone who is THAT deceived running our country and making life-impacting decisions for us? We've had non-believers before as President, but never one from a bona fide cult!

If you want more information on the Mormon cult, we have a great Steeling the Mind Bible Conference presentation titled "Satan's Top Two Cults" by James Walker. It covers in detail both the Mormons and Jehovah's Witnesses. Click here for more info.
Bill