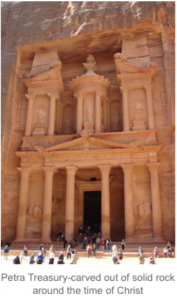 One of the new seven wonders of the world, Petra is incredibly fascinating - a place like no other. Located in southern Jordan, near the western border with Israel, Petra today is an empty city.

Though it's hard to reach, due to the rugged and almost impassable mountains of western Jordan, still almost a million
tourists trek there each year from all over the world to see the jaw-dropping scenery.

The following is a brief outline of the case for Petra as the place to which the Jews will flee in the middle of the coming seven year tribulation period.

The time period when we believe Petra will stand tall in fulfillment of Bible prophecy is the last 3 1/2 years of the tribulation, the length of days described in Daniel 12:11.

After the Rapture, the seven year tribulation will begin with a peace treaty, orchestrated by a new world leader, between Israel and ten nations in Europe and the Middle East (Dan 9:27). The ten nations will include five nations from Europe, the western leg of Daniel's image in Daniel 2, and five nations (toes) from the eastern leg of the image. (10 toes in Dan 2:41, 10 Kings in Rev 17:12)

Israel's promised peace, specifically agreed to be a seven year period (Dan 9:24a), will come to a screeching halt after 3 1/2 years (Dan 9:24b). Jesus describes it as the the worst day in the history of the Jews-past, present and future.

"...a great tribulation, such as has not occurred since the beginning of the world until now, or ever shall." Matt 24:21

Therefore, the worst Jewish holocaust is still in the future! Calling it a holocaust might be an understatement. The horror of this one day is so bad it's actually hard to comprehend. Imagine, if you can, a single day when 2/3rds of all Jews will die at the hand of the double-crossing Antichrist! (Zech 13:8)

Backing up to the beginning of the Tribulation, in the wake of the post-Rapture world crisis, a fast-rising and boastful world leader promises peace to Israel (Rev 6:2, Dan 9:27, Dan 7:8). This peace offer will include the right to rebuild their long lost but beloved Temple (Rev 11:1,2), which would allow the Jews to return to animal sacrifices for the first time in almost 2000 years. Israel accepts the ungodly peace offer, against the warnings of the Torah, and ultimately pays dearly for it (Mat 24:21).

This takes place at a time when all the Jews in the world will have been forced to squeeze back into Israel, which is not very large, roughly the size of New Jersey. With 15 million Jews in the world today, that's 10 million Jews murdered in one day- certainly qualifying as the worst day in the history of the Jews!!

Also in the first half of the Tribulation, 144,000 Jewish evangelists will proclaim the good news of Jesus' shed blood for sins (Rev 7:4; 14:6). Some Jews will listen, some won't, and millions will die in one day.

But the focus of this article is not the 2/3s who die, but rather, the 1/3 who escape, having heeded the warnings the 144,000 Jewish evangelists pointing to God's Word.

To keep it simple, the following is a time-line of events for the middle seven days in the heart of the seven year tribulation:

> The world mourns the death of the world leader for three days. Rev 13:3

> Satan is thrown to the earth from heaven. Satan, being a spirit, needs a body and takes up residence in the body of the dead world leader. Rev 12:9

> The world leader appears to rise from the dead after being dead for three days. He has only one eye and one arm. Zech 11:17

> The Antichrist goes to the Jewish Temple, halts the sacrifices, stands in the Holy Place and claims to be the Biblically prophesied Messiah. Dan 11:31 Matthew 24:15

This is the literal fulfillment* of the famous "watch for the abomination of desolation" prophecies of the most important event in the future for the Jews. It is a sign to them to run as though their life depended on it-because it will!

Dan. 11:31 "Forces from him will arise, desecrate the sanctuary fortress, and do away with the regular sacrifice. And they will set up the abomination of desolation."

Matt. 24:15-18 "Therefore when you see the ABOMINATION OF DESOLATION which was spoken of through Daniel the prophet, standing in the holy place (let the reader understand), then those who are in Judea must flee to the mountains. Whoever is on the housetop must not go down to get the things out that are in his
house. Whoever is in the field must not turn back to get his cloak. But woe to those who are pregnant and to those who are nursing babies in those days! But pray that your flight will not be in the winter, or on a Sabbath. For then there will be a great tribulation, such as has not occurred since the beginning of the world until now, nor ever will."

Only 1/3 of the Jews will escape the 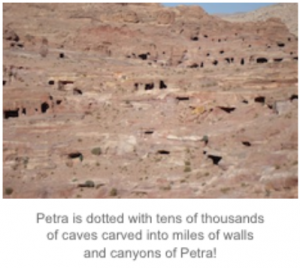 murderous hand of the antichrist. They flee with nothing but the clothes on their backs. Those who are not hunted down (the last to get out of town) will eventually congregate in Edom, present day southern Jordan, in the area of Biblical Bozrah. It is here in the area of Bozrah that God has prepared a place for the surviving Jews to be protected from the anti-christ's murderous hand.

"And the woman fled into the wilderness where she had a place prepared by God, so that there she might be nourished for one
thousand two hundred and sixty days." Rev 12:6

"And men will go into caves of the rocks, and into holes of the ground" Is. 2:19 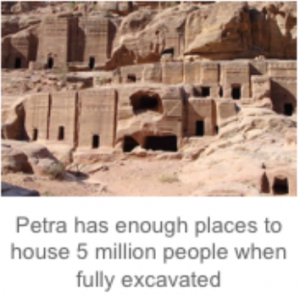 For 3 1/2 years, the Jews will live in fear of the antichrist, but will be provided for and protected by God. They will have been stripped of all their earthly possessions...no
cell phones, cars, faxes, Internet, or money. God will provide them with food and water (Rev 12:6). They will loose their pride (Is 2:11). With all the distractions out of the way, the Jewish people, chosen by God for His purposes, will reacquaint themselves with their Maker.

After 3 1/2 years, at the end of the Tribulation, their Messiah will present Himself to them there.

"Who is this who comes from Edom, with garments of glowing colors from Bozrah, this One who is majestic in His apparel, marching in the greatness of His strength? 'It is I who speak in righteousness, mighty to save.'" Is 63:1

"And one will say to him, 'What are these wounds between your arms?' Then he will say, Those with which I was wounded in the house of my friends." Zech. 13:6 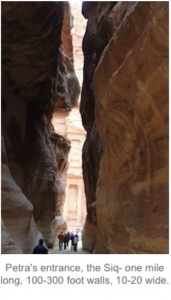 2000 years ago, a civilization called the Nabateans, sprung up in south Edom, in the area called Bozrah. History doesn't know for sure where they came from, or what caused them to disappear seemingly almost overnight. But they lived there for about 300-400 years continually building and expanding a city called that today we call Petra ("rock").

Petra has only one entrance that is a mile long, roughly 10 to 20 feet wide, with towering cliffs above reaching as high as 300 feet. The long winding entrance, called the siq, opens up into open spaces and canyons large enough to hold 5 million people, when fully excavated.

All throughout Petra, the 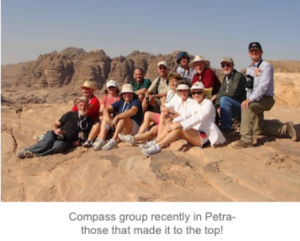 Nabateans carved into the miles of soft sandstone walls. They carved houses, stables, meeting rooms, caves, tombs and more. The amount of digging, and the beautiful stone edifices still there today
are mind-boggling. 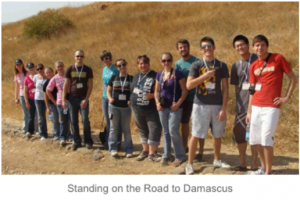 As we mentioned, Petra was recently designated as one of the "Seven Wonders of the World." Few of the tens of thousands who trek to see Petra each year have any clue about the Biblical tie-in. But we try to make visiting Petra and option on every trip we take to the Holyland.

Every Believer should go to Israel at least once in their life. Seeing what you're reading in your Bible simply changes you. And when you go, if at all possible, try to include Petra. It will knock your-Bible-socks-off!!!