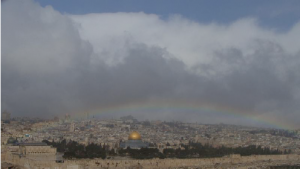 Rainbow over Old City of Jerusalem

Once again the world powers are attempting to fashion a peace treaty between the Israelis and Palestinians.

Regardless of what they eventually end up with, at best, the Bible says it will bring peace only temporarily - if it brings peace at all! There will be no true lasting peace until the Prince of Peace, Jesus Christ, returns to set up His earthly Kingdom.

The above picture of the Old City of Jerusalem, taken from the top of the Mount of Olives, shows the Muslim "Dome of the Rock" prominently located in the middle of the Temple Mount (the "Temple Mount" is the treed area around the gold plated Dome- approximately 35 acres). To the far left you can see the Al- Aqsa Mosque with it's black dome. All of this is on Mount Moriah, the place where Abraham offered Issac as a sacrifice, where the first two Jewish Temples were built, and where the future throne of Jesus will be located as He rules the world for 1000 years.

So why is a Muslim shrine located in the middle of this area that is so sacred to the Jews? The fact it was built there also explains 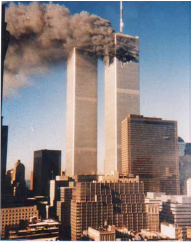 why the Muslims are trying to build a Mosque near Ground Zero in New York. You see, when the Muslims conquer an area, they build a shrine or mosque to commemorate the victory. To build at ground zero would be to mark the spot of a great victory. The name they originally assigned it, "Cordoba," refers to a big Islamic victory in Spain in 711.

All this Mosque building is tied together in their brazen attempt to take over the world with Islam as the only religion. Don't you think it's odd that no churches or synagogues can be built in Saudi Arabia, yet they demand to build at Ground Zero! There are over 100 Mosques already in New York, so it's not too hard to figure out that there is an ulterior motivation - not to mention they won't even reveal the funding sources for the Ground Zero Mosque.

But the plot will really thicken when Bible prophecies come to fruition regarding the Temple Mount at the end of the Church Age. The Bible says PRIOR to the second coming, the Jews will rebuild their Temple and go back to blood sacrifices to God (Dan 9:27). Since sacrifices can only be made on Mount Moriah, there is a problem here... the Muslim Dome of the Rock is in the way. It will either be destroyed and a Jewish Temple rebuilt in its place, or, some other deal worked out so that Jews can rebuild their Temple on Mount Moriah and begin sacrifices again after a 2000 year or so lapse. Again, all of this is prior to the Second Coming of Christ, but after the Rapture.

Now you know what's at stake in Jerusalem. All the talk about land, settlements, Gaza, the West Bank and such, are secondary issues. What's really at stake is who controls Mount Moriah. The Muslims truly think they will take over the world one day. And every end-time battle deals with Muslim dominated nations. But the Bible says Allah (Satan) loses, the Jews (Jehovah God) win, and the Jewish God/man Jesus will set up His throne on Mount Moriah (Isaiah 32:1).

If you would like to print this article click here: Mount Moriah- God's Special Place on Earth