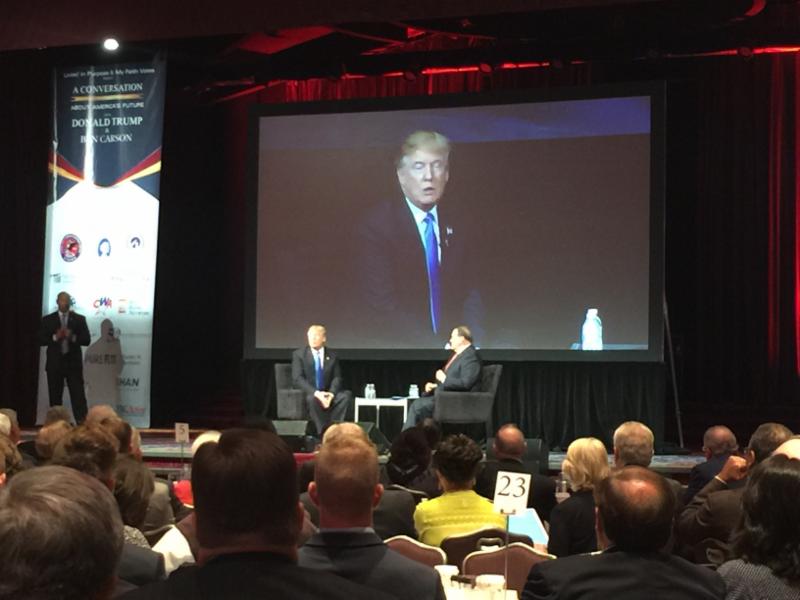 Today (6/21/16) was a fascinating day in New York City as over 1000 Christian leaders from all over the U.S. gathered to ask Donald Trump tough specific questions about his policy and intentions should he be elected POTUS.

The event organizers originally requested Dallas, Texas as a middle-of-the-nation location to hold a private, get-some-private-time-with-Trump event--hoping to attract some 200-300 national Christian leaders. Seems a LOT of Christians are bothered by the idea of having to vote for him and this would be a chance to meet privately to ask questions.

But the only opening on Trump's schedule was in NYC for 20 minutes, only 30 days away. So they took it, despite little time to get the word out.

A screening committee was set up to find and send out invitations to about 1000 Christian leaders. Because the high expense of flying into and staying in NYC, and the date less than 30 days away, they reserved a room for only 100 people at the Marriott Marquis in Times Square.

Each person who accepted the invitation then had to be vetted and ultimately ok'ed by the Secret Service. Once cleared, the person was notified by phone. I got two sets of phone questions about my work with Compass and when I finally got approved, I had 10 days to make plans. (I'm sure I was at the end of the list!!)

But despite receiving the late notices, the response to attend was off-the-charts. Almost everyone who they invited accepted the invitation. And some who were left off the original list apparently lobbied for inclusion. Ultimately there were over 1000 who hastily changed their schedules to attend.

The security was tight for the 7 a.m. opening for registrants. I stood in long lines for an hour, passing through three hotel and conference check points before finally getting through Secret Service security.

Once I finally got to my seat at my table I was astonished to be sitting next to a sharp-as-a tack Auburn grad who is married to another Auburn grad and lives in Vestavia, Alabama where I grew up. She's a registered lobbyist who worked for George Bush (2) when she first got out of Auburn. War Eagle to that one!

Also at my table was a Congressional candidate from North Carolina, a Christian TV station owner from Florida and the Chairman of the Board of the Washington Times. There were about four past Steeling conference speakers in the room, that I noticed. Probably more I didn't see.

After opening remarks by the conference organizers, and an opening prayer by James Robison, Jerry Falwell Jr. spoke, followed by Franklin Graham. Both attested to the authenticity and trustworthiness of Donald Trump.

George Barna, the polling guy, spoke. Using several charts he showed that Trump has a genuine path to victory if Christians vote.

But in the last Presidential election, some 40 million evangelicals stayed home and that was literally the difference in the election. Bummer for us.

Then Ben Carson spoke for about 20 minutes. His easy and soft-spoken style easily warmed the crowd. He referred to the fact that Trump just had a bad three weeks, while Clinton had a good three weeks, and yet the race is still close, virtually tied.

But Carson's main point was that Trump is a proven leader. He's certainly not a politician who's always worried about offending someone. And that's what we need, a leader, not a politician. Politicians are what got us in this mess to begin with!

Next came Mike Huckabee, who moderated the discussion between the attendees and Trump. Before introducing Trump, he made the point that we're not voting on a pastor, or a Pope, but rather a leader. A leader who is quite different from the past to change things from the status quo.

So the day was set that this was not about Trump's Christian knowledge or virtues, but rather where Trump wanted to take the country. And where we're headed if Trump's not elected.

The biggest concern centered around the Supreme Court. The next President will appoint anywhere from one to five members. The Second Amendment, public bathroom policies, prayer in public places, etc. will likely be settled by the next President's appointees.

When Trump was introduced, he didn't speak from the podium but rather sat next to Huckabee on the stage fielding questions from the crowd for about 90 minutes. So much for the 20 minutes originally allotted. There was no press allowed inside, so it was just Trump and the Christian leaders talking back and forth.

The really big Christian leader names were pre-selected to directly ask Trump questions from the floor--i.e. people like James Dobson, Ralph Reed, David Jeremiah, Tony Perkins, Robert Jeffress, etc. Most felt religious liberty was at stake with this election saying that if the policies Obama has set in place were allowed to continue, Christians would eventually have no liberty. Harassment of Christian organizations would continue.

Through it all, Trump answered each of our questions with solid answers, both acknowledging the problem cited and how he would take care of the problem. He seemed to be genuinely concerned about changing the direction of the nation.

Trump addressed many subjects including the Supreme Court, national defense, border problems, Christian persecution, his pro-life stance, support of Israel, dumping Obamacare, education control back to the states and energy. All with conservative positions and answers.

I would say that most of those who attended, who were not sure if they would vote for him, left convinced of how much is at stake in this election if Trump is not elected.

After Trump left, to a standing ovation, more questions were taken from the audience addressed to a panel of Christian leaders. Things like the dismantling of the military, Christian business rights, etc. were discussed at length.

The last speaker was Eric Metaxas, who I had never heard of... but he was excellent. He showed that there is what he referred to as a Golden Triangle of Freedom.

Therefore, America won't function as a republic without faith and virtue, and our freedoms are taken for granted. Our public schools have for 40 years taught a negative view of America, that we're the problem. America is the most successful country in the history of the world, yet we're teaching our kids that we're the problem??

I have to say, we pretty much all came away thinking that if Clinton, or any Democrat, is elected, the path this nation's on currently will continue and WILL lead to disaster. If we don't turn the ship now, we're headed to be like socialized Europe-a disaster getting worse by the month. Even potentially reaching problems like what's going on in Venezuela, where they are currently literally fighting for daily food. Don't think it can't happen here, it could. It's not out of the realm of possibilities...it's that serious. A LOT is at stake in this election!

Our hope is in Christ, and our prayer is for one last chance (think Nineveh) so when the Lord takes out the Church at the Rapture, He will take us out in a revival, instead of bailing us out of a spiritual disaster. We want to finish well!

At the end of the day was time for prayer. With few exceptions, the entire room knelt on the floor in corporate prayer for our nation. I took the opportunity to take a quick picture of that sight, some 1000 people in their Sunday clothes, most on the floor of the room praying together. Who knows where this will lead. Maybe....

Everyone should pray daily for our country and add Mr. Trump to your prayer list even now. He is so upsetting the "establishment" that it's not a stretch to think his life's in danger.

The bottom line for me personally is that I love the constitution more than I dislike Trump's antics and ego. He will attempt to change the direction of this nation. Clinton won't. With Trump we have a chance. With Clinton we have no chance.

Be thankful we still have a chance and VOTE your conscience this fall.

PS- Best laugh at the conference came when Ralph Reed said, "Why is Hillary touting herself as the first woman Presidential candidate if that could change?"