Article: A Peek Behind the Name of God

"Let the name of God be blessed forever and ever" Dan 2:20

When we go to Israel, our guides are usually non-Christian Jews. To be a guide in Israel means you are licensed by the State of Israel only after completing the equivalent of a two-year college course studying the hundreds of Biblical sites in the promised land. 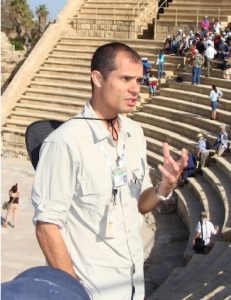 So the vast majority of our Israeli guides are articulate, well-educated...but secular--meaning not religious. They usually observe Passover and Day of Atonement but nothing else. Sorta like some Christians go to church only on Christmas and Easter.

It is always perplexing to us on our Israel trips to hear the guide say things like, "Over here God used miracles for David to defeat the Amorites," or "Here's where Jesus raised Lazarus from the dead," yet totally miss what they are actually saying.

They talk about God and Jesus all day long, quote passages out of the Old and New Testaments, but don't connect the spiritual dots. They refer to Him by name, but the deep and powerful meaning of that name escapes them.

What Does "Yahweh" Mean?
"Yahweh" is the personal name of God in the Bible. Called the Tetragrammaton, it is composed of four letters, no vowels. The Hebrew letters are Yod, Hey, Vav, Hey, read right to left in the Hebrew (see above), left to right in English (YHWH).

Hebrew letters all have meanings. You're going to love what the letters mean in "Yahweh"!

gender. It portrays the symbol of an entire hand, or closed hand, from the wrist to the fingertips. This is distinguished from another letter, kaf, that means "palm." 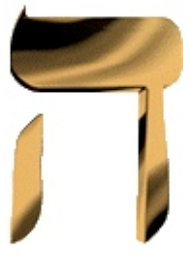 Hey
Hey is feminine and means "to behold," "show" or "reveal."

Can you tell where this is going?

Vav
Vav is masculine and signifies a nail, peg or hook, signifying being

nailed or bound together.

So when read in Hebrew, right to left, God's name means:

It gets even better when you combine the meaning of the individual letters with the overall meaning of the word—Yahweh, YHWH, which means "Salvation," then it basically translates:

"Behold, the nailed hand is salvation."

There are other Biblical references to the Messiah's pierced hands and feet: 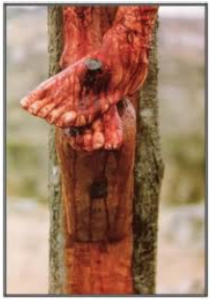 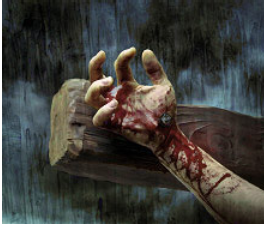 With the name of God being so specific, it
makes one wonder how in the world do the
Jews, especially the Jewish guides in Israel,
miss the fact Jesus came as the Messiah?!

The answer, of course, is in scripture. God has "blinded" them.

But God has not blinded us. His Holy Spirit living in us reveals 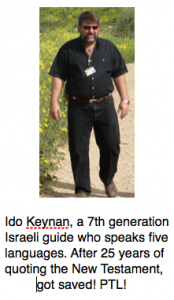 truth to Believers through the Word of God. So we've looked at the Hebrew letters in "Yahweh" and shown how, in no uncertain terms, they specifically spell out "Behold the Nailed Hand."

Here's another nugget along those same lines...

"Yahweh" is the personal name of God, much like Abraham and Sarah are personal names. Words like Elohim (God), El (mighty), Shaddai (almighty) and Adonai (master) are titles. And of course "Lord" is a title.

"You shall not take the name of the LORD your God in vain, for the LORD will not leave him unpunished who takes His name in vain." Deut. 5:11

The word "LORD" above is not in the original manuscripts. "Yahweh" is what was originally written. The Jews changed the word "Yahweh" in their Torahs because they believed it was blasphemy to pronounce the personal name of the Lord out loud.

Thousands of times God put His personal name in Scripture and each time it's been changed to a title!

If a man wrote a love letter to his wife, would she want to read "Dear Woman" or would she rather read "Dear Susan?"

"Yahweh" wanted a personal relationship with the Jews. He even set up a temporary sacrificial system so He could live right in their midst. But they couldn't quite grasp His provisions.

"Then the Lord said, 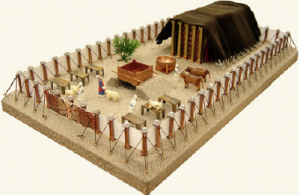 "Because this people draw near with their words and honor Me with their lip service, but they remove their hearts far from Me, and their reverence for Me consists of tradition learned by rote" Is. 29:13

In the Church Age, Jesus is the personal name we use to address our Lord of Lords. We can say, "Jesus, Lord of my life." But it's actually quite
impersonal to address Him with titles like "Dear Lord," "Lord God," etc.

"Jesus" wants a personal relationship with you. But no more sacrifices are necessary. Yahweh paid it all on the cross and has given you the power of
His Spirit living in you to accomplish His will.

If you would like to print this article click here: A Peek Behind the Name of God