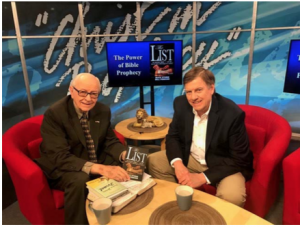 I am not a reader of novels, and the reason is simple — I don’t have the time. I read voraciously, but I focus on books per- taining to Bible prophecy. When I do have time for recreational reading, I either read biographies or books pertaining to Ameri- can history. I love biographies.

But when I heard about the new novel titled, The List, I decided to at least give it a try since I was told that it is a book about the importance of Bible prophecy and the impact it can have on people’s souls.

I got hold of a pre-publication copy on a pdf file, and I fired it up one evening on my laptop computer and started reading. And I kept reading . . . and reading.

I found it to be a fascinating historical novel based on the Scriptures.

It zeroes in on the last weeks in the life of Jesus leading up to His crucifixion, and the central characters are Joseph of Arimathea and Nicodemus — two influential Jewish members of the Sanhedrin, the ruling council of the Jewish people in the time of Jesus.

We know from the Scriptures that Nicodemus was a Phari- see. The Jewish affiliation of Joseph is not mentioned, but the authors assume that he was a Sadducee because of his wealth and influence. He is referred to as a “rich man” (Matthew 27:57) and he was so influential that he had direct access to the Roman governor, Pilate (Matthew 27:58).

So, Joseph and Nicodemus should not have had anything to do with each other. But, as the story develops, these two antagonists are drawn together by their mutual fascination with an itinerant preacher named Yeshua (Jesus). Nicodemus has a large collection of Jewish scripture scrolls, and he begins to search them for Messianic prophecies. As he finds them, he begins to compile a list of them — thus, the title of the book, The List.

When Nicodemus begins comparing the prophecies to the life of Yeshua, he becomes convinced that Yeshua is the long awaited Messiah. Joseph is not so certain. They start meeting surreptitiously to compare notes and discuss the possibilities. As they do so, both are aware of the danger to their lives, their families and their seats on the Sanhedrin if it becomes known that they are even contemplating that Yeshua might be the Messiah.

The book is full of surprises, particularly at the end when the trials of Jesus are held. But I will say no more than that, lest I spoil the story for you.

The book is the product of two minds — Bill Perkins and Buck Storm. Bill is an expert on Bible prophecy. He is the founder of Compass International Ministries in Coeur d’Alene, Idaho. This is the ministry that sponsors the Steeling the Mind Conference which focuses on defending the fundamentals of the Christian faith. Bill is the one who conceived the novel and directed its writing.

But Bill recognized that he was no novelist, so he went looking for one, and he found what he was looking for in Buck Storm. And did he ever! Buck is a poet, songwriter and novelist. And, oh my, can he write! His style is mesmerizing.

Bill and Buck resort to the same technique that the Apostle Peter used on the Day of Pentecost when he preached the very first Gospel sermon (Acts 2:14-36). Peter simply stated one prophecy after another, and each time he proclaimed that Jesus had fulfilled it. The result was the salvation of 3,000 souls. Such was the power of fulfilled prophecy.

In like manner, Bill and Buck suggest in their novel that Joseph and Nicodemus came to belief in Jesus through the same process — namely, matching Messianic prophecies with the life of Jesus. I think they are right on target with this assumption.

And the interesting thing is that Bible prophecy contin- ues to have the same impact today. For example, back in the days of the Jesus Movement in the 1960s and 70s, Chuck Smith built the Calvary Chapel Movement through the preach- ing of Bible prophecy to uni- versity students in California.